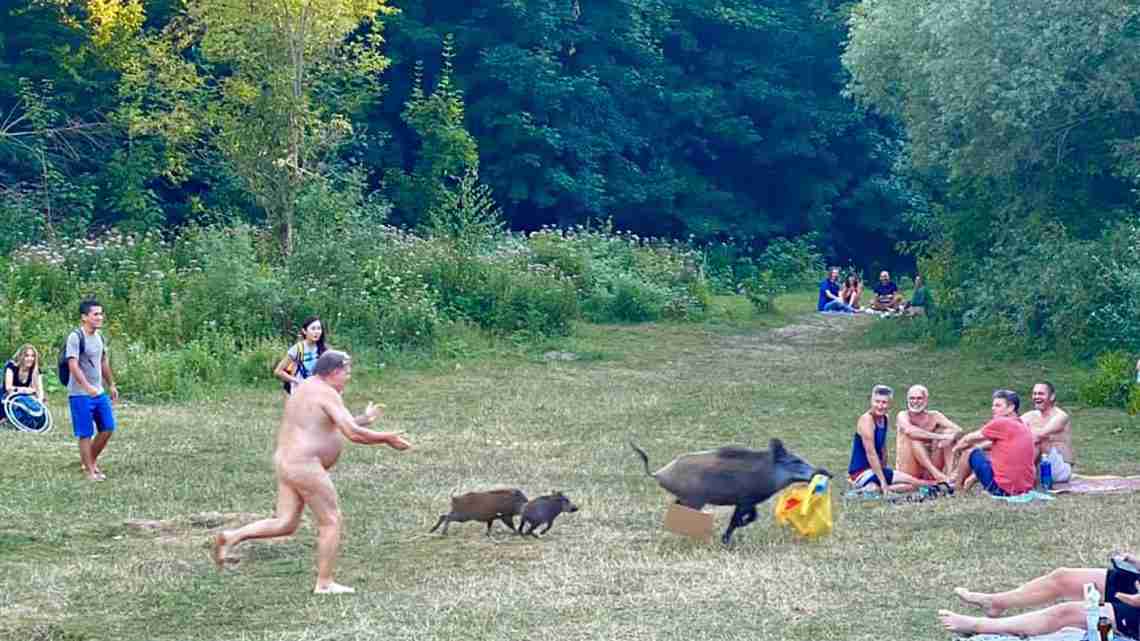 It’s hard to say who was more surprised:  The naked man whose bag was stolen by a wild boar and her litter of piglets, or the animals being chased by the human.

The panicked man, who was bathing in the nude at a Berlin lake, chased off the hungry boars, who were searching for food in the bag that also happened to contain an expensive laptop. Such incidents are becoming more common in the German capital, and at the popular Teufelssee bathing lake where this one occurred, the boars regularly show up to rummage through bags left on shore, hoping for food.

The video of the caper was taken by life coach and actress Adele Landauer, who said, “I had been sitting at my computer all day long working and it was really hot, so I decided to go for a swim.” At that time, she saw a wild pig stealing pizza and decided to film it to send to her daughter and granddaughter in Los Angeles.

“I don’t think she has ever seen a wild pig and I wanted her to see what they were doing here in Germany,” Landauer said. “Just as I picked up the phone to take the image, suddenly another wild pig ran into view with its piglets following and carrying a yellow bag in its mouth  It was being chased by a man who was as naked as the day he was born.”

After getting permission from the naked man, whose name was not released, Landauer posted the video on her Instagram account, with the message: “stay focused.”

Even though Berlin is densely developed, wild boar are a growing problem there. Landesverband Berlin, which is responsible for managing the issue, admits it is difficult to bring under control, as such animals have no significant natural predators and spend a lot of time digging up the soil, damaging local flora and also regularly staging raids for food in built-up areas. The organization is currently closed because of the coronavirus, but its website says licensed hunters are trying to keep the numbers down—with limited success.