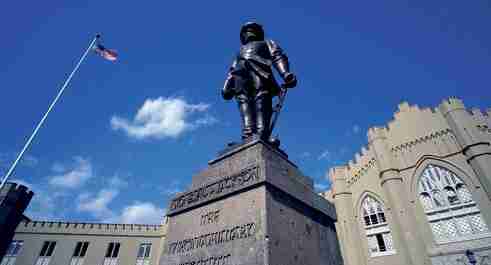 Around 9:45 a.m., a crane plucked the larger-than-life statue that freshmen were once required to salute off its base and slowly hoisted it to the ground. A small crowd gathered quietly on the mostly empty campus in Lexington where Jackson once taught, quietly looking on amid flurries of snow.

The school’s board voted to remove the statue in late October after The Washington Post published a story that described an “atmosphere of hostility and cultural insensitivity” at VMI, the oldest state-supported military college in the U.S. The piece detailed incidents such as lynching threats and a white professor reminiscing in class about her father’s Ku Klux Klan membership.

The Post’s story also led to the ouster of VMI’s superintendent, retired Army Gen. J.H. Binford Peay III, and prompted state ofﬁcials to commit to hiring an outside ﬁrm to investigate the students’ allegations.

Since Peay’s departure, VMI announced Cedric Wins, a retired U.S. Army major general, would serve as its interim superintendent, becoming the ﬁrst Black leader to serve in that role. The school’s board has also committed to other changes, including creating a permanent diversity ofﬁce.

“The history of VMI over the past 181 years is well documented. Stonewall Jackson’s ties to Lexington and the Institute as an instructor are part of that history,” Wins said in a statement Monday. But “VMI does not deﬁne itself by this statue and that is why this move is appropriate,” he added.

VMI said it will be relocated to a nearby Civil War museum at a battleﬁeld where dozens of VMI cadets were killed or wounded. It was to be taken to storage Monday while work continued to remove the pedestal and prepare the new site, school spokesman Bill Wyatt said.