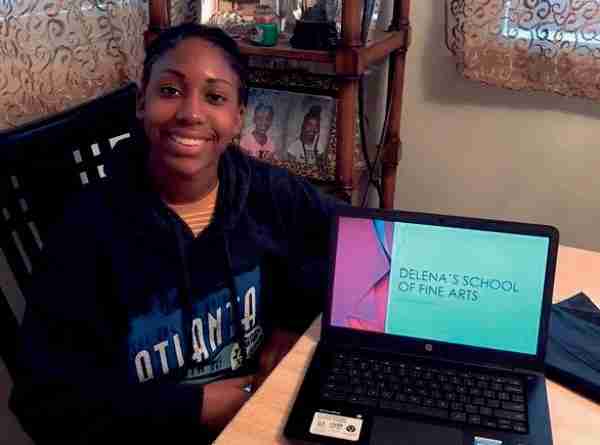 DELRAY BEACH, Fla. – COVID-19 has triggered havoc all over the globe, shutting down schools, stores, events and even forcing the postponement of the Tokyo 2020 Olympic games this summer.

Nevertheless, a Delray Beach-based nonproﬁt mentoring program did not allow the virus to halt its operations while still ensuring the safety of its clients.

Thirteen students from Delray Beach to Riviera Beach logged into Skype and Cisco Webex for the much-anticipated Spring Break camp, for elementary through high school students. Although the camp was modiﬁed to a virtual format, the objective of the weeklong project was still maintained, said Eric Akers, the camp’s facilitator.

“Because they can’t go to school and we can’t meet as a group does not mean that learning stops,” said Akers regarding the camp which was hosted by KOP Mentoring Network.

“We are creating future leaders, and as such, we have to prepare these kids to adapt and overcome hurdles.”

The tuition-waived camp offered a session on entrepreneurship and lessons in civics, geography and history, as well as a virtual ﬁeld trip to Disney’s theme parks. Camp Director C. Ron Allen also took them on a virtual ﬁeld trip to a ranch, where they saw horses, rabbits, sheep, ducks, chickens and goats. They learned the history of jazz and rap music from a professional musician, and they were tasked with writing a poem about coronavirus. They then recorded the lyrics to the soundtrack of their favorite song. Camper Anushka Vickers found the music assignment and rapping to the soundtracks “extremely fun”.

“It was new, and you got to learn a lot of new things” said the Northboro Elementary fourth grader, who also taught a 15-minute ﬁtness session. Asiana Livingston, a 10th grader at Somerset Academy Canyons, said she found the virtual camp engaging and informative.

“It was a great opportunity to learn about jazz music and how to put our own lyrics to jazz backgrounds,” the aspiring cardiologist said. “It was also helpful to be able to talk about how we feel about this coronavirus, to talk about our future businesses and even learn how to design our own websites.”

While it can be difﬁcult for one to reconcile smiling, conversational, energetic, enthusiastic campers with learning – not to mention with academic rigor – that connection is the very hallmark of a KOPMN experience, organizers and parents said. Some parents were surprised by the camp’s innovative practices and their ability to keep their students engaged in their activities considering the circumstances.

“At ﬁrst, I thought that they were going to be easily distracted, but Mr. C. Ron kept them engaged and interested in what they’re teaching them,” parent Kiesha Gajahdar said. She also said her daughter “enjoyed doing the projects, learning fun facts and being educated about the pandemic.” Gajahdar said she wished the organizers continue what they have started and build upon it.

Camp began each day promptly at 8 a.m. with Triston Blake, a 4-year-old Northboro Elementary pre-k student, leading the Pledge of Allegiance. Allen then led them through a 50minute roundtable session. They discussed what was on the news the previous evening and campers were encouraged to share their thoughts on the pandemic.

Whenever a new word was introduced, Allen or one of the campers would shout out, ‘Word of the day’, an indication that they picked up a new vocabulary word. They would research the word, discuss it and at times use it in a sentence before moving on.

The Lunch & Lab period, between 11 a.m. and 1 p.m., was not a recess. Instead, campers were assigned YouTube videos to watch and topics to research. They would be quizzed on the videos and make presentations once they resumed.

Camp ended at 3 p.m. with campers reciting their afﬁrmation. “They were able to get a lot done in those short hours,” Gajahdar said.

The virtual Spring Break Camp was an active learning environment where campers participated in the process of learning by doing. Each camper was expected to learn, perform and think at an advanced level, Allen said, adding that the teaching for academic rigor effectively fostered active learning.

“We give our facilitators the freedom to teach to this end, which makes learning fun,” said Allen, whose entry was a ﬁnalist in the XQ Institute’s Super Schools award, a national competition sponsored by Loraine Powell Jobs to redesign the American high school, and who successfully authored the applications for three charter schools.

“This is camp, and it is supposed to be fun, not to mention, fun is the happy byproduct of engagement in a productive, active learning environment,” Allen said. “But considering the climate, we had to strike that delicate balance of making it fun while ensuring we instilled substance in them.”