Watching Central Intelligence is not a smart use of time 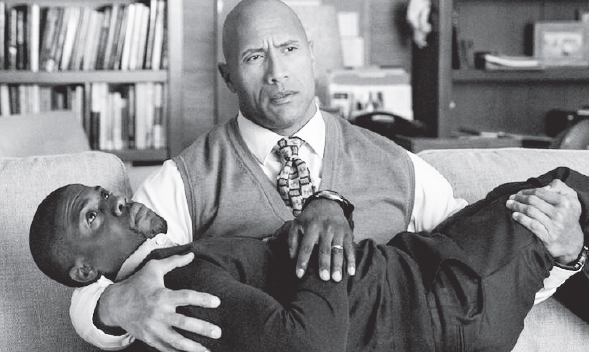 I recently saw a film that seemed enjoyable during its two hour run; but when it ended, I asked myself, what did I just watch? My fellow movie goers buzzed with excitement and laughter. I laughed, too; but, when I had a chance to quietly reflect on the 120 minutes of my life that I spent watching Central Intelligence, I came up short. I thought about the nuances of the film and realized it was all unicorn poop.

Central Intelligence, which was presented by the Motion Picture Arts Association (MPAA) for the opening night of the 20th American Black Film Festival in Miami, is the kind of film you watch one time. Watch it more than once and you will find yourself in a state of conflict.

Starring one of my favorite action heroes, Dwayne Johnson (Bob Stone), and one of my favorite comedians, Kevin Hart (Calvin Joyner), Central Intelligence is a buddy film about two men out to clear their name before the CIA can gun them down as enemies of the state. Calvin is a former high school jock who was voted “Most Likely to Succeed,” but is now unhappy with his self professed ho-hum life as a CPA in an accounting firm.

Calvin, though, was lucky enough to marry his high school sweetheart, Maggie (Danielle Nicolet), who is as beautiful as she is successful. They live in a beautiful house in a beautiful neighborhood and they truly love each other. So Bob finds Calvin’s whining that he’s not happy with his non-exciting life insulting.

Screenwriters Ike Barinholtz, David, Stassen,Rawson Marshall Thurber (who also directed the film) have created a story that sounds good on paper: take an Everyman CPA and thrust him into a CIA operation gone south with a literally larger than life CIA agent who really just wants to be his friend. It sounds like a funny premise.

On the other hand, Bob Stone, formerly known as Robbie Weirdich, was the school joke when he was younger. He was also overweight and flighty. Fast forward 20 years later and Bob is a larger than life, muscular CIA agent who can take down a group of bad guys in seconds. Unfortunately, Bob is still as flighty as he was in high school wearing T-shirts with rainbows and unicorns and sporting a fanny pack 1990s style. Apparently, having a killer instinct and bulking up Hulk-style didn’t change his odd personality.

Speaking of odd, the audience is used to the Rock being a certain type of character: tough, yet funny; family oriented, yet able to throw a punch when needed. He’s the typical action hero. Fearfully, it appears that Johnson and Hart were so gung ho about reaping the laughs from the audiences that they didn’t stop to look at the overall film. Yes, Johnson can be funny. Hart is definitely funny and he plays well against stoic actors.