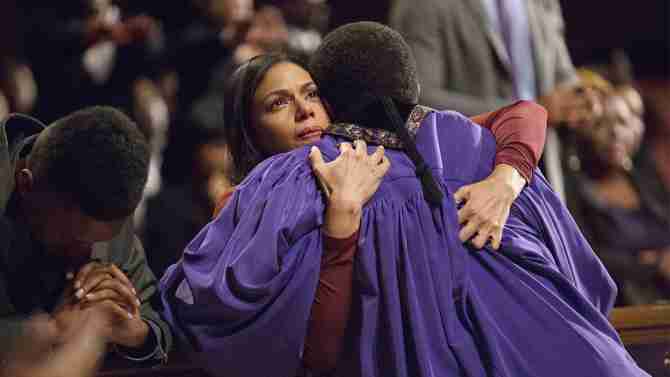 WEST HOLLYWOOD, Calif. – Oprah Winfrey’s latest project as both producer and actress continues her exploration of religion and spirituality.

The media mogul unveiled the first episode of her new series, Greenleaf, on Wednesday night at a private screening at Soho House in West Hollywood, California. The show, which follows the personal dramas and questionable ethics of a family at the center of a Memphis, Tennessee, megachurch, is set to premiere next month on Winfrey’s OWN network.

After taking a documentary ap- proach to faith in her Belief series that aired on OWN last year, Winfrey sees Greenleaf as “another platform to really offer the message that we are more alike than different; to offer the message that being grounded in knowing what you believe is important. I’m not trying to tell you what to believe or how to believe.”

She developed Greenleaf with the show’s creator, Craig Wright. It focuses on the title family, led by Bishop James Greenleaf (Keith David), a charismatic preacher who lives in a palatial estate with a full-time staff. His riches may have unscrupulous origins, though, because he starts sweating when a local politician says he’s looking into churches’ tax-exemption claims. All the bishop’s adult children have gone into the family business except Grace (Merle Dandridge), who left Memphis for a new life in Arizona and stopped going to church.

Winfrey plays Mavis, an outspo- ken bar owner estranged from her sister, Greenleaf family matriarch Lady Mae (Lynn Whitfield). Winfrey said she based the character on her late friend and mentor Maya Angelou. “If Maya had a bar, she would be Mavis,” Winfrey said.

Wright, David, Dandridge, Whitfield and producer-director Clement Virgo appeared alongside Winfrey for a panel discussion after the screening.

While Greenleaf examines how righteous or corrupt these church leaders might be, Winfrey and the other panelists say the show remains respectful of church traditions.

“I, Oprah Winfrey, am going to do nothing ever that disrespects the church,” she said. “I am who I am, where I am, sitting here today, because of the black church. But there are some people within the church with some flaws.” Winfrey’s character appears throughout the show’s 13-episode arc. Greenleaf has already been renewed for a second season. The recurring role represents Winfrey’s return to scripted TV after nearly 20 years.

She said acting satisfies something her other work doesn’t. “Being able to act is a way to lose my- self and be submerged into the ideas and consciousness of someone else,” she said. “In many ways, it’s like a vacation, like a vacation from myself.”