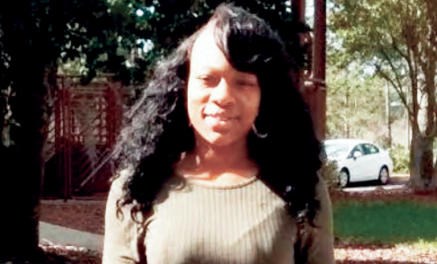 JACKSONVILLE, Fla. (AP) – A group of activists and lawyers are calling for Florida authorities to drop charges against a Black woman who said she was acting in self-defense when she shot and wounded an ofﬁcer during a raid on her home last year.

Diamonds Ford, 28, has said she never heard the SWAT ofﬁcers identify themselves as law enforcement and thought she was ﬁring at an intruder, as evidenced by the fact that Ford called 911 after ﬁring her weapon.

“Miss Ford, just hearing her voice, she was in fear,” Kelly said during a news conference outside the Duval County Courthouse. “She thought she was going to die that day.”

Ford and her 28-year-old ﬁance, Anthony Gantt, are facing charges of attempted murder of a law enforcement ofﬁcer and armed possession of marijuana with the intent to distribute, according to court records.

Kelly and other supporters held Monday’s news conference to call for those charges to be dropped and to highlight what they said was a case of racial injustice faced by the two Black defendants.

According to the arrest report, SWAT ofﬁcers were executing a residential search warrant Sept. 28 as part of a nationwide narcotics operation. Ford told authorities she and Gantt were asleep when she awoke to the sound of the bedroom window being broken.

The report said Ford shot one of the ofﬁcers with a handgun before running to the bathroom and calling 911. The ofﬁcer’s injuries weren’t lifethreatening. Ford surrendered to law enforcement once she learned they were police.

According to the arrest report, authorities said they announced themselves via loudspeaker before executing the warrant.

Kelly said “no-knock” warrants, which have come under scrutiny across the nation since police in Louisville, Kentucky, killed Breonna Taylor last year, do not exist in Florida. But he said if authorities do not announce themselves properly so residents are aware of their presence, they are essentially not knocking.

Ford’s bond was set last year at $535,000 dollars. Recent efforts at a bond reduction were rejected by the judge.

According to an Instagram post last week by Kelly, various groups collected money to pay for Ford’s bond. Kelly said Ford doesn’t pose a flight risk or a danger to the community, and her bond should not have been set for that amount.

“You don’t allow Black women to protect themselves. So we are here to ask you to protect Black women,” said Tray Johns, executive director of Dignity Power, which helps formerly incarcerated women. “We drove from all over the country and in six days we raised over half a million dollars for a Black woman.”

Gantt remains jailed on $350,000 bond. Attorneys have ﬁled a motion to reduce his bond.

Ford’s arrest comes at a time of national conversation about systemic racism in law enforcement. Johns said prosecutors need to protect Black women and drop the charges against Ford.

“Dignity Power is going to stand here, and we’re going to protect her with our very lives,” Johns said.