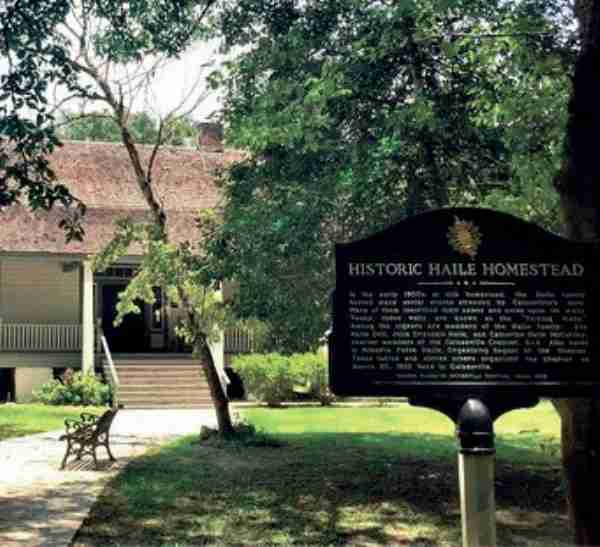 Gainesville, Fla (AP) – Americans learn about slavery, but most do not have a personal connection to it.

For Tatanya Peterson, who spent 13 years researching her family history, it became personal thanks to the documents of a plantation owner. Peterson is a lifelong Alachua County resident whose four-times great grandparents, Hampton and Grace Hathcock, were enslaved at the plantation of James Chesnut near Alachua.

“It’s just a range of emotion _ the anger, the sorrow to know that my family was enslaved,” Peterson said. “You can only imagine what kind of slave owners the Chesnuts were.”

Peterson was helped in her research by Karen Kirkman of Historic Haile Homestead on Archer Road.

Haile Plantation, the subdivision in southwest Gainesville, is named after the family.

And Gainesville’s Chestnut family _ owners of the Chestnut Funeral Home and notable politicians _ are descended from an enslaved man of a Chesnut plantation, with a slightly different spelling of the name.

Peterson, who works at the University of Florida, said she ﬁrst got the idea to trace her family history when she was watching the PBS television show `Finding Your Roots’ with her mother, Martha Lumpkins Miller.

They still live on property off Peggy Road in Alachua that has been in the family for 95 years. Miller said Saturday her father never talked much about the family’s history.

While Peterson was able to gather information from sources including ancient records from the Alachua County Clerk of the Court, the deﬁnitive link that Hampton and Grace were slaves at the Chesnut plantation came with Kirkman’s help.

Kirkman asked Peterson where her family members were buried. The graves are at Mount Nebo United Methodist Church near Alachua, which steered Kirkman to plantations owned by James Chesnut and certain Haile family members.

“We happen to have the original plantation journal of James Chesnut, and he kept very meticulous records,” Kirkman said. “Sure enough, I ﬁnd Hampton and Grace with children. It was a really exciting moment. Tanya and I met at the visitor center, and I brought the journal with me. We went through it, and she discovered ancestors, including a little boy and girl who never made it to a census.” Peterson said she is not done yet. She, her mom and an uncle have had their DNA analyzed _ Peterson said she would like to ﬁnd out where in Africa they originated.

“I want to start ﬁlling in gaps. Every little bit helps. Another clue will let you make more connections,” Peterson said. “If I’m able to, I would really like to go to Africa. I won’t be complete until I get to Africa.”

Next post Exec excels from childhood to pro basketball