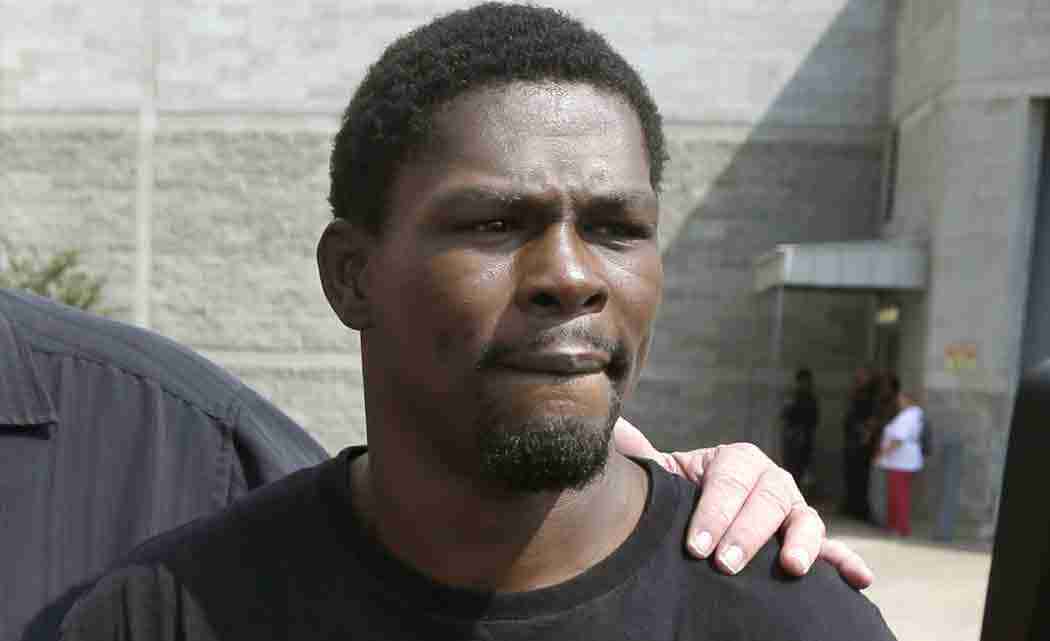 A Little Rock woman said Tuesday that boxing champion Jermain Taylor threatened to fatally shoot her three small children, and that she knocked the gun away after the cursing middleweight — once called a role model by the city’s mayor — put the weapon to her husband’s head.

Toya Smith, 40, said she and her family, including children ages 5, 3, and 1, were watching the city’s Martin Luther King Jr. Day parade Monday when Taylor, 36, produced his championship belt and asked to get a photo with her son. Smith says her family had never met Taylor before and that it appeared he had been drinking.

She said Taylor — who already faces charges in an August shooting in Maumelle, Arkansas — produced a gun and fired two shots into the air, then threatened to kill her husband.

“He put (the gun) up against his temple, I jumped in front of it and it went off up into the air,” injuring her husband’s ear, Smith said. “He was going to shoot him, but I saw it, he was going to kill him and I had to hit the gun.”

Taylor’s attorneys did not return phone calls for comment Tuesday.

A Little Rock police report says Taylor was arrested without incident and a gun was recovered. He is charged with aggravated assault, endangering the welfare of a minor and drug possession. Pulaski County Sheriff’s Capt. Carl Minden said Tuesday that Taylor was still in jail and bond was set at $50,000.

Smith said she and her family tried leave in their car, but Taylor continued pointing the gun toward the vehicle.

“He was pointing at the kids, so I jumped in front of him again and said ‘Please don’t shoot my kids,'” Smith said.

She said Taylor cursed, saying that he didn’t care about the children or her and that he was going to kill her husband.

Taylor, who won the International Boxing Federation middleweight title in October, has served as an unofficial ambassador for Arkansas since 2000, when he won a bronze medal at the Sydney Olympics.

“He is a role model and someone I have looked up to, and I will continue to do so,” said Jim Dailey, who was Little Rock’s mayor during Taylor’s heyday. He called the boxer’s recent troubles “a glitch.”

Taylor faces first-degree battery and first-degree terroristic threatening charges in connection with the August incident in which Pulaski County sheriff’s deputies say Taylor shot his cousin. He has pleaded not guilty in that case, and a trial has been set for June.

Until he took up boxing, Taylor had never left Arkansas. He helped raise his sisters after their father left and said he spent his spare time in the ring to stay off Little Rock’s streets.

His winning of the worldwide middleweight boxing title, defeating Bernard Hopkins in a split decision a decade ago, set the state abuzz.

“Arkansans are really appreciative of the fact that this is a young man who could have ended up in jail, but instead took the path of boxing and ended up with a world championship,” Arkansas first lady Janet Huckabee said as the state held a parade and rally following the first Hopkins fight.

Dailey said he would expect Taylor to make amends.

“I’m disappointed,” Dailey said. “At the same time, I’m hopeful and optimistic that he will rise above this.”

Next post Police: Doctor shot inside hospital, gunman killed himself

Previous post Mom accused of setting baby afire, killing her, due in court