Zenger book review: ‘She Proclaims: Our Declaration of Independence from a Man’s World’ 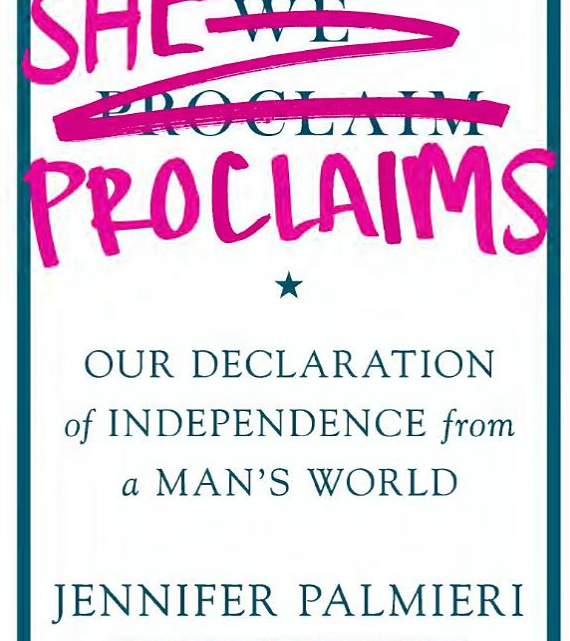 “A woman needs a man like a fish needs a bicycle,” Australian lawmaker Irina Dunn once said, giving the women’s rights activist Gloria Steinem a catch-phrase so clever that leaving it out of any feminist treatise in the 1970s made a writer seem naïve. Fifty years later, fish and bicycles needn’t make cameos in manifestos for women—even those whose broad mandate is that women can get along fine without Y-chromosomes in their lives.

Jennifer Palmieri’s “She Proclaims: Our Declaration of Independence from a Man’s World” ably carries Steinem’s torch but loses its flame in grim, humorless prose about women who cope—or don’t—with living and working in a world whose economics, politics and societal norms are created and dictated by men.

The author is most famous for being communications director for U.S. Sen. Hillary Clinton’s unsuccessful 2016 presidential campaign, a race won by Alpha Male Donald Trump. Palmieri has had enough.

Women, she writes, “are still being told to shut up, but we are finally starting to push back. We owe it to ourselves to tell women, past and future, to continue to speak out and refuse to be silenced.”

“[T]here is a lot of hate being directed toward women and women’s causes these days. It’s very upsetting and no one should have to endure it,” she writes, before descending into practiced language about “the patriarchal status quo” and “the tide of history.”

That language is familiar to U.S. university students, but it’s unlikely Palmieri’s prescription for newly liberated women, the basis of a Women’s Declaration of Independence, could build momentum in Iraq, India or Venezuela.

The idea of women having their own “life, liberty, and the pursuit of happiness” moment is not new: It peaked with gusto in the 1980s as feminists sought and nearly saw approved an Equal Rights Amendment to the U.S. Constitution. What separates now from then is the still-stinging defeat of the first woman to make a credible White House run. And the Women’s March, a phenomenon that momentarily stole all the oxygen from an American president’s inauguration.

Palmieri lived the Clinton campaign, from thunderous applause to deafening silence as Trump claimed victory. She brings crisp and fresh insights that course only through an insider’s veins. And she overlays them with penetrating intelligence on everyday problems that ordinary women confront daily.

“She Proclaims” seems calculated to create buzz among them. And it’s imaginable that its release date, too, was calculated to propel a woman to the Oval Office.

Just eight months ago the Democratic presidential field included heavy-hitters Kamala Harris, Amy Klobuchar and Elizabeth Warren. Any of them could have named Palmieri the White House’s chief of staff. She had already been communications director during President Barack Obama’s second term.

It’s Palmieri’s status as queen of the what-ifs that will make “She Proclaims” a summertime must-read, and some of its themes might drive legislative proposals in the Democrat-controlled House of Representatives. But Republicans run the Senate—at least until January—and just 25 women hold seats. Keenly aware that the patriarchy is what it is, she deftly insists she’s pro-female, not anti-male.

“I want to be clear this is not a declaration against men. I do not believe men are my enemy, nor do I feel that my life has been one long exercise in subordination to them,” Palmieri writes.

A brief 10-page chapter titled “Partners” lays out what she wants from men: compliance.

The Women’s March seems to have catalyzed Palmieri’s leftover campaign energy and her daily Trump angst into “She Proclaims.”

“As soon as I saw the news reports detailing the number of women, women who’d turned out for the march,” she writes, “I knew that women had turned a corner for good. Women in America had each other’s backs in ways I had never experienced before and it made me grateful beyond measure.”

Many still proudly show off their pink knitted “pussy hats” and their protest signs.

The bizarre, made-for-TV fashion statements were designed to grab everyone’s attention just long enough to read the words—a communication sleight-of-hand that feminist writers have identified as uniquely female since men don’t need tricks to dominate any stage where they have a spotlight.

No more, Palmieri writes: “I believe we have gone as far as we can following a man’s model.”

She Proclaims: Our Declaration of Independence from a Man’s World by Jennifer Palmieri. Published by Grand Central Publishing. $26-U.S.;$33-Canada.

The post Zenger book review: ‘She Proclaims: Our Declaration of Independence from a Man’s World’ appeared first on Zenger News.