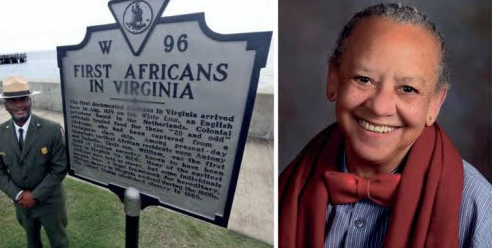 PHOTO COURTESY OF GWU.EDU AND NIKKI-GIOVANNI.COM

VICKSBURG, Miss. (AP) – Bells will ring in a Civil War battleground in Mississippi to remember enslaved Africans who were brought to North America 400 years ago. A ceremony is taking place at 1:30 p.m. Sunday in Vicksburg National Military Park. It commemorates the 400th year that people of African descent have lived on this continent.

Several community leaders from Vicksburg and from the National Park Service are scheduled to speak.

A news release from the military park says the park will join other historic sites around the U.S. in ringing bells for four minutes, beginning at 2 p.m. central.

MONTGOMERY, Ala. (AP) – Events in Alabama on Sunday will mark the 400th anniversary of enslaved Africans being brought to colonial America.

Communities across the nation are marking a “Day of Healing” recognizing the 400 years since the arrival of slaves to colonial Jamestown, Virginia.

Africatown, a community formed by freed slaves after the Civil War, is hosting a Day of Healing event at 1:15 p.m. Sunday at the Mobile County Training School. The tribute will include a drum call, performances, and a butterfly release.

Africatown was founded by the former slaves brought on the last slave ship to America.

The Alabama Historical Commission said the bell will ring at the Alabama Capitol at 2 p.m. Sunday as bells ring across the nation at that time.

They’ll speak Saturday at the 2019 African Landing Commemorative Ceremony in Hampton. It’s being held on Chesapeake Bay, where ships traded men and women from what’s now Angola for supplies from English colonists.

The landing in August 1619 is considered a pivotal moment that presaged a system of race-based slavery.

Saturday’s event is one of several commemorating the arrival. A family that traces its roots to the Africans gathered at a cemetery Friday. A bell will ring at the landing spot during Sunday’s “Healing Day.”

HAMPTON, Va. (AP) –A family that traces its bloodline to America’s first enslaved Africans says their ancestors endured unimaginable toil and hardship but they also helped forge the nation.

Wanda Tucker told a crowd Friday at the family’s cemetery in Hampton, Virginia, that “we’re still here.” She said her family started “building America” 400 years ago.

Tucker spoke at one of several events in Virginia that will mark the arrival of more than 30 enslaved Africans to a spot on the Chesapeake Bay in August 1619.

The men and women from what is now Angola arrived on two ships and were traded for food and supplies from English colonists. The landing is considered a pivotal moment in American history that set the stage for a race-based system of slavery.

The North Charleston City Council voted unanimously Thursday to give the money from the city’s taxes on hotels to the International African American Museum being built in Charleston.

Mayor Keith Summey says he hopes the money helps tell the story of North Charleston’s predecessor Liberty Hill, where a black couple bought farmland during the Civil War that was later sold to other African Americans.

North Charleston’s history also includes racial struggles . The city paid a $6.5 million settlement to the family of a black man, Walter Scott, who was shot in the back and killed by a white police officer in 2015.