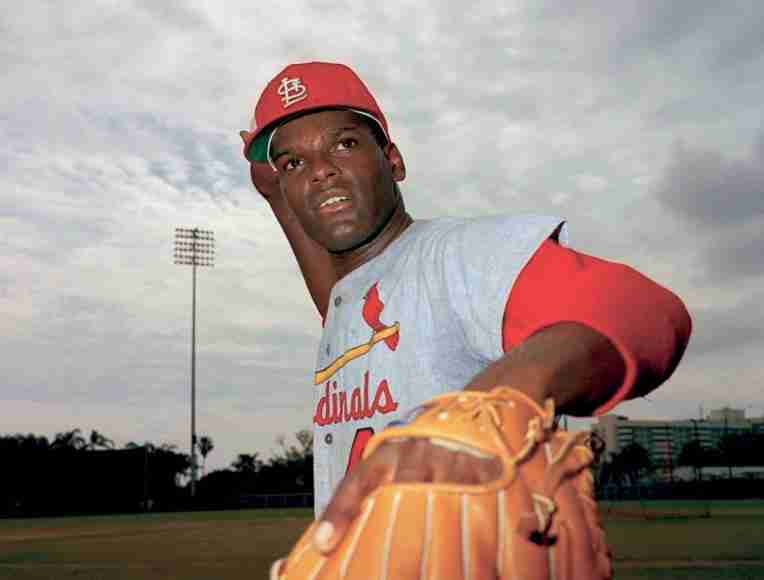 Hall of Famer Bob Gibson, the dominating St. Louis Cardinals pitcher who won a record seven consecutive World Series starts and set a modern standard for excellence when he ﬁnished the 1968 season with a 1.12 ERA, died Friday. He was 84.

The Cardinals conﬁrmed Gibson’s death shortly after a 4-0 playoff loss to San Diego ended their season. He had long been ill with pancreatic cancer in his hometown of Omaha, Nebraska.

Gibson’s death came on the 52nd anniversary of perhaps his most overpowering performance, when he struck out a World Series record 17 batters in Game 1 of the 1968 World Series against Detroit.

One of baseball’s most uncompromising competitors, the two-time Cy Young Award winner spent his entire 17-year career with St. Louis and was named the World Series MVP in their 1964 and ’67 championship seasons. The Cards came up just short in 1968, but Gibson was voted the National League’s MVP and shut down opponents so well that baseball changed the rules for fear it would happen again.

Gibson died less than a month after the death of a longtime teammate, Hall of Fame outﬁelder Lou Brock. Another pitching great from his era, Tom Seaver, died in late August.

“I just heard the news about losing Bob Gibson and it’s kind of hard losing a legend. You can lose a game, but when you lose a guy like Bob Gibson, just hard,” Cardinals star catcher Yadier Molina said. “Bob was funny, smart, he brought a lot of energy. When he talked, you listened. It was good to have him around every year. We lose a game, we lose a series, but the tough thing is we lost one great man.”

At his peak, Gibson may have been the most talented all-around starter in history, a nine-time Gold Glove winner who roamed wide to snatch up grounders despite a ﬁerce, sweeping delivery that drove him to the ﬁrst base side of the mound; and a strong hitter who twice hit ﬁve home runs in a single season and batted .303 in 1970, when he also won his second Cy Young.

Baseball wasn’t his only sport, either. He also starred in basketball at Creighton and spent a year with the Harlem Globetrotters before totally turning his attention to the diamond.

ters never forgot how he glared at them (or squinted, because he was nearsighted) as if settling an ancient score.

Gibson snubbed opposing players and sometimes teammates who dared speak to him on a day he was pitching, and he didn’t even spare his own family.

“I’ve played a couple of hundred games of tic-tac-toe with my little daughter and she hasn’t beaten me yet,” he once told The New Yorker’s Roger Angell. “I’ve always had to win. I’ve got to win.”

Equally disciplined and impatient, Gibson worked so quickly that broadcaster Vin Scully joked that he pitched as if his car was double-parked.

Ball in hand, he was no nonsense on the hill. And he had no use for advice, scowling whenever catcher Tim McCarver or anyone else thought of visiting the mound.

“The only thing you know about pitching is you can’t hit it,” Gibson was known to say.

His concentration was such that he seemed unaware he was on his way to a World Series single game strikeout record (surpassing Sandy Koufax’s 15) in 1968 until McCarver convinced him to look at the scoreboard.

During the regular season, Gibson struck out more than 200 batters nine times and led the National League in shutouts four times, ﬁnishing with 56 in his career. In 1968, thirteen of his 22 wins were shutouts, leading McCarver to call Gibson “the luckiest pitcher I ever saw. He always pitches when the other team doesn’t score any runs.” POSTSEASON GREATNESS

He was, somehow, even greater in the postseason, ﬁnishing 7-2 with a 1.89 ERA and 92 strikeouts in 81 innings. Despite dominating the Tigers in the 1968 Series opener, that year ended with a Game 7 loss – hurt by a rare misplay from star center ﬁelder Curt Flood – and a rewriting of the rules that he would long resent.

Gibson’s 1.12 ERA in the regular season was the third lowest for any starting pitcher since 1900 and by far the best for any starter in the post-dead-ball era, which began in the 1920s.

His 1968 performance, the highlight of the so-called “Year of the Pitcher,” left ofﬁcials worried that fans had bored of so many 1-0 games. They lowered the mound from 15 to 10 inches in 1969 and shrank the strike zone.

“I was pissed,” Gibson later remarked, although he remained a top pitcher for several years and in 1971 threw his only no-hitter, against Pittsburgh.

Gibson had a long major league career even though he was a relatively late bloomer and was in his early 30s in 1968. Signed by the Cards as an amateur free agent in 1957, he had early trouble with his control, a problem solved by developing one of baseball’s greatest sliders, along with a curve to go with his hard fastball. He knew how to throw strikes and how to aim elsewhere when batters stood too close to the plate.

“Don’t dig in against Bob Gibson; he’ll knock you down,” Aaron said, according to the Boston Globe. “He’d knock down his own grandmother if she dared to challenge him. Don’t stare at him, don’t smile at him, don’t talk to him. He doesn’t like it. If you happen to hit a home run, don’t run too slow, don’t run too fast. If you happen to want to celebrate, get in the tunnel ﬁrst. And if he hits you, don’t charge the mound, because he’s a Gold Glove boxer.” “I HATE EVERYBODY”

Only the second Black (after Don Newcombe) to win the Cy Young Award, he was an inspiration when insisting otherwise. Gibson would describe himself as a “blunt, stubborn Black man” who scorned the idea he was anyone’s role model and once posted a sign over his locker reading “I’m not prejudiced. I hate everybody.”

But he was proud of the Cards’ racial diversity and teamwork, a powerful symbol during the civil rights era, and his role in ensuring that players did not live in segregated housing during the season.

He was close to McCarver, a Tennessean who would credit Gibson with challenging his own prejudices, and the acknowledged leader of a club which featured whites (McCarver, Mike Shannon, Roger Maris), Blacks (Gibson, Brock and Flood) and Hispanics (Orlando Cepeda, Julian Javier).

“Our team, as a whole, had no tolerance for ethnic or racial disrespect,” Gibson wrote in “Pitch by Pitch,” published in 2015. “We’d talk about it openly and in no uncertain terms. In our clubhouse, nobody got a free pass.” Cardinals pitcher Jack Flaherty, who is Black, grew close to Gibson in recent years. The right-handers would often talk, the 24-year-old Flaherty soaking up advice from the great who wore No. 45.

“That one hurts,” said Flaherty, the Cardinals’ losing pitcher Friday night. “He’s a legend, ﬁrst and foremost, somebody who I was lucky enough to learn from. You don’t get the opportunity to learn from somebody of that caliber and somebody who was that good very often.”

“I had been kept up on his health and where he was at. I was really hoping it wasn’t going to be today. I was going to wear his jersey today to the ﬁeld but decided against it,” he said.

Born Pack Robert Gibson in Omaha on Nov. 9, 1935, Gibson overcame childhood illness that nearly cost him his life. His father died soon before his birth, and he grew up in poverty. His mother was a laundry worker, trying to support Gibson and his six siblings.

“Growing up without a father is a hardship and deprivation that is impossible to measure,” Gibson wrote in “From Ghetto to Glory,” one of a handful of books he published.

Gibson went to Omaha Tech High School and stayed in town, attending Creighton from 1954-57, and averaging 20.2 points during his college basketball career. The roughly 6-foot, 2-inch Gibson, who seemed so much taller on the mound, spent the 1957-58 season with the Globetrotters before turning his full attention to baseball.

At Omaha in the minor leagues, he was managed by Johnny Keane, who became a mentor and cherished friend, “the closest thing to a saint” he would ever know in baseball.

Gibson was often forced to live in separate hotels from his white teammates and was subjected to vicious taunts from fans, but he would remember Keane as “without prejudice” and as an unshakeable believer in his talent.

His early years with the Cardinals were plagued by tensions with manager Solly Hemus, who openly used racist language and was despised by Gibson and other Cardinals. Hemus was ﬁred in the middle of the 1961 season and replaced, to Gibson’s great fortune, by Keane.

The pitcher’s career soon took off. He made the ﬁrst of his eight National League All-Star teams in 1962, and the following year went 18-9 and kept the Cardinals in the pennant race until late in the season.

In 1964, a year he regarded as his favorite, he won three times in the last 11 games as the Cardinals surged past the collapsing Philadelphia Phillies and won the National League title. Gibson lost Game 2 of the World Series against the New York Yankees, but he came back with wins in Games 5 and 7 and was named the MVP.

The series was widely regarded as a turning point in baseball history, with the great Yankee dynasty falling the following year and the Cardinals embodying a more modern and aggressive style of play. Keane stuck with Gibson in Game 7 even after the Yankees’ Clete Boyer and Phil Linz homered in the ninth inning and narrowed the Cardinals’ lead to 7-5. He would later say of Gibson, who retired Bobby Richardson on a pop fly to end the series, that he had a commitment to “his heart.”

Gibson was also close to Keane’s successor, Red Schoendienst, who took over in 1965 after Keane left for the Yankees. Gibson enjoyed 20-game seasons in 1965 and 1966 and likely would have done the same a third straight year, but a Roberto Clemente line drive broke his leg in the middle of the season. (Gibson was so determined he still managed to ﬁnish the inning).

Gibson returned in September, ﬁnished 13-7 during the regular season and led the Cardinals to the 1967 championship, winning three times and hitting a home run off Red Sox ace Jim Lonborg in Game 7 at Boston’s Fenway Park. The ﬁnal out was especially gratifying; he fanned ﬁrst baseman George Scott, who throughout the series had been taunting Gibson and the Cards.

But 1968 was on a level few had seen before. He began slowly, losing ﬁve of his ﬁrst eight decisions despite an ERA of 1.52, and fumed over the lack of hitting support. (“Starvation fare,” Angell would call it).

But from early June to late August, Gibson was unbeatable. He won 15 straight decisions, threw 10 shutouts and at one point allowed just three earned runs during 101 innings. One of those runs scored on a wild pitch, another on a bloop hit.

He was at his best again in the opener of the World Series, giving a performance so singular that his book “Pitch by Pitch” was dedicated entirely to it.

On a muggy afternoon in St. Louis, facing 31-game winner Denny McLain and such power hitters as Al Kaline – who also died this year – Norm Cash and Willie Horton, he allowed just five hits and walked one in a 4-0 victory.

Gibson struck out at least one batter every inning and in the ninth fanned Kaline, Cash and Horton to end with 17, the final pitch a slow breaking ball that left Horton frozen in place.