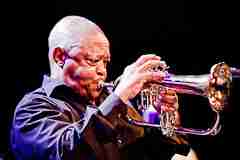 JOHANNESBURG (AP)- Legendary South African jazz musician and anti-apartheid activist Hugh Masekela has died at the age of 78 after a decade-long fight with cancer, according to a statement from his family on Tuesday.

Often called the “Father of South African jazz,” Masekela died in Johannesburg after what his family said was a “protracted and courageous battle with prostate cancer.” Masekela was a rare artist who succeeded in fusing politics with his music, making his songs and performances compelling and timeless.

He quickly became an integral part of the 1950s jazz scene in Johannesburg as a member of the band the Jazz Epistles and a member of the orchestra in the groundbreaking jazz opera, “King Kong.”

Condolences from fans poured out on social media paying tribute to the influential musician’s career.

“A baobob tree has fallen,” Nathi Mthethwa, South Africa’s minister for arts and culture, wrote on Twitter.”The nation has lost a one of a kind musician. We can safely say Bra Hugh was one of the great architects of Afro-Jazz and he uplifted the soul of our nation through his timeless music.”

South African President Jacob Zuma expressed his condolences, saying Masekela “kept the torch of freedom alive globally, fighting apartheid through his music and mobilizing international support … His contribution to the struggle for liberation will never be forgotten.”

Masekela inspired generations of musi cians in jazz and beyond and collaborated in recent years with South African house music DJ Black Coffee, who tweeted Tuesday:”I have no words.”

Kenya President Uhuru Kenyatta paid tribute to Masekela in a series of tweets that showed a picture of the two walking together. Kenyatta wrote of Masekela:”His music then was the music of a free Africa: full of anger at injustice; confident that one day these injustices would be overcome.”

In the 1960s he went into exile in the United Kingdom and the United States, using his music to spread awareness about South Africa’s oppressive system of white-minority rule. He scored an international number one hit in 1968 with”Grazing in The Grass.”

Masekela spent time in both New York and Los Angeles, performing at the 1967 Monterey Pop Festival with some of the era’s most iconic musicians, including Janis Joplin, Otis Redding and Jimi Hendrix. He collaborated with many musicians including Herb Alpert and was married to South African singer and activist Miriam Makeba for two years.

In the 1980s Masekela appeared with Paul Simon and several other South African musicians as part of the “Graceland” album tour.

Many of his compositions were about the struggle for majority rule and full democratic rights in South Africa. Masekela’s catchy upbeat 1987 song”Bring Him Back Home” calling for Nelson Mandela’s release from prison became an international anthem for the anti-apartheid movement.

Masekela returned to South Africa in 1990 after Mandela was freed and the African National Congress party was unbanned. He released over 40 albums and toured in South Africa and internationally until late in 2017.

Sal Masekela, Masekela’s son who is also a musician, wrote in a statement that it was”difficult to comprehend that this moment is real,” recalling his father’s performances in New York when he would “steal the hearts and souls of innocents with a musical storytelling all his own.”

“My biggest obsession is to show Africans and the world who the people of Africa really are,” Masekela is quoted as saying on his official website.