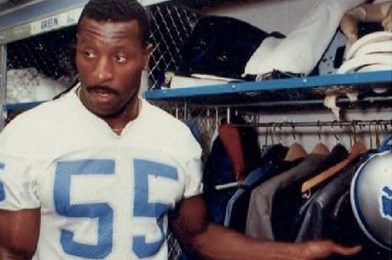 DETROIT (AP) – Mike Cofer, a Pro Bowl linebacker who played a decade with the Detroit Lions and is second on the team’s career list in sacks, has died. He was 58.

The Lions said Cofer died Thursday. Cofer’s son Phil plays basketball for Florida State. The school said he found out about his father’s death after the Seminoles’ victory over Vermont in the NCAA Tournament on Thursday. Chuck Walsh, a Florida State spokesman, said Mike Cofer had been dealing with a long illness.

Cofer played 123 games with the Lions from 1983-92. He’s the only linebacker in team history to reach eight sacks in a season.

He did it four times.

“Mike was the definition of the perfect football player,” former Lions quarterback Eric Hipple said in a statement. “His attitude matched his ability and he gave 100 percent in everything he did. The same goes for his care and attention for fellow players, fans and people in general. He brought smiles and joy to those he interacted with and was not only a great player, but also a wonderful man.”

A Knoxville, Tennessee, native, Cofer played at Tennessee. He was drafted by the Lions in the third round in 1983, and he was a member of the team that went to the NFC title game at the end of the 1991 season. He received Pro Bowl honors during the 1988 season.

He finished his career with 62-½ sacks. “I was truly blessed to have had the chance to coach Mike,” former Lions coach Wayne Fontes said. “He had such tremendous character. When you heard people talking about a player who always gave 100 percent, it was Mike.”

Phil Cofer missed Florida State’s game Thursday with an injured right foot. Coach Leonard Hamilton said he will remain with the team for a second-round game Saturday against Murray State.

Hamilton called Mike Cofer “one of the most competitive human beings that has ever played in the NFL.”

“He is a guy who had to endure an unbelievably challenging debilitating disease that mentally and emotionally was draining in itself, but the physical toll it took on his body is beyond anything that you possibly could explain,” he said. “And he never com plained. He always faced it every day with the heart of a lion, with tremendous amount of courage, and he passed that same mental and emotional aspect over to his son, Phil.”

“He always challenged Phil, and he always encouraged him to play with the heart of a lion, and without making any excuses for anything at all. And Phil’s attitude has been as good as anyone that I’ve ever coached in my whole coaching career.”

Cofer is survived by his wife, Reba, and sons Michael and Phil.