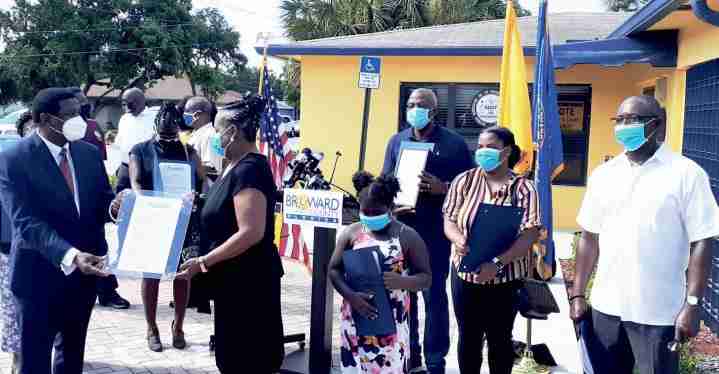 Fort Lauderdale, Fla. – Two days after the passing of civil rights icon Congressman John Lewis, and one day after the birthdate of the late Nelson Rolihlahla Mandela, Broward County, Florida, honored both legendary ﬁghters’ powerful legacies of dedication to the cause of universal equal justice.

The mayor and others were honoring the martyred 37-year-old farmworker who was captured by a mob 85 years ago on July 19, 1935, then lynched on present-day Davie Boulevard, just west of NW 31st Avenue (Dr. Martin Luther King Jr. Boulevard).

Stacy was hung from a tree and his body riddled with no less than 17 gunshot wounds, after which several of the perpetrators and spectators claimed pieces of the man’s clothing as souvenirs of the crime. Some remnants may still be in the possession of descendants today, grisly heirlooms of America’s congenital disease.

For the occasion, the NAACP ofﬁce displayed a replica of the famous “A MAN WAS LYNCHED YESTERDAY” banners of the 1920s and ‘30s. Publicly flown by branch ofﬁces around the nation immediately following each reported incident, they were a means to agitate for a federal anti-lynching law, which would supersede the lax or nonexistent state and local enforcement. That was particularly the case in the South, which routinely allowed such crimes to go unpunished, as having been committed by “persons [allegedly] unknown.”

NAACP Fort Lauderdale/Broward Branch President Marsha Ellison was the featured speaker. Holness discussed present and future healing and prevention of racial strife through the creation of the Broward County Racial Equity Task Force, in addition to the formal reading of the proclamation of the day. Notably, it includes much of the historical detail of the case. Attractively mounted copies were presented to family members.

According to the county’s news release announcing the event, the events of 1935 are summarized ls follows: On July 16, 1935, an unidentiﬁed black man knocked on the door of the home of Marion Jones of Fort Lauderdale and asked for a drink of water. When she let him in, he threatened her with a small knife. On July 18th, Rubin Stacy, whose name appears in some accounts as Rueben Stacey, a tenant farmer, was seen ‘hiding’ in bushes by the road by a driver and reported as suspicious. Mr. Stacy was arrested by Constable W.D. Dougald of Deerﬁeld Beach. The arrest took place after a foot chase in which Mr. Stacy fled while being shot at by Dougald. Mr. Stacy was considered guilty because he ran. He was arrested and turned over to Sheriff Walter Clark of the Broward County Sheriff’s Department. Mr. Stacy denied having attacked Marion Jones. On July 19th, rather than using a police lineup, Sheriff Clark took Rubin Stacy to the home of Marion Jones. She received a $25 reward for identifying him as her attacker, as did the deputies who brought him to her house to be identiﬁed. Later, the car Mr. Stacy was being transported in was run off the road. According to police accounts, Mr. Stacy was taken from the car by a group of local men to a place close to the Jones’ home. The Sheriff reported it was there Mr. Stacy was shot and hung from a tree. There were no arrests made.