Push to posthumously give black soldier D-Day Medal of Honor 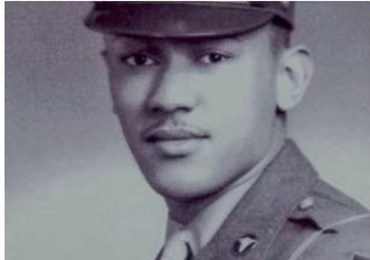 The Congressional Black Caucus is pushing to posthumously award an African American soldier the Medal of Honor for his bravery on D-Day.

Cpl. Waverly B. Woodson Jr. was an Army medic assigned to the 320th Barrage Balloon Battalion. The battalion’s job was to set up explosive-rigged balloons to deter German planes. At a time when the military was still segregated by race, the balloon battalion was the only African American combat unit to land on Normandy on June 6, 1944.

U.S. Sen. Chris Van Hollen of Maryland, who’s been pushing to recognize Woodson’s heroism during the Normandy invasion, and 51 caucus members are petitioning the Army to review Woodson’s case. Van Hollen became involved in Woodson’s case in 2015 when Woodson’s wife, who lives in Maryland, came to him for help.

“Corporal Woodson was a hero who saved dozens, if not hundreds, of lives on Omaha Beach. His courage deserves to be honored with the Medal of Honor, and I continue to work with the Army to make this a reality,” Van Hollen said in a news release.

A letter sent to the Army Wednesday asks Ryan McCarthy, the acting secretary of the Army, to open a formal review into the Woodson case. The letter describes how Woodson was wounded while still on his landing craft but spent the next 30 hours saving lives on the beach.

“Cpl. Woodson went above and beyond the call of duty by spending 30 grueling hours saving the lives of dozens, if not hundreds, of his fellow soldiers,” the letter reads. “Cpl. Woodson was a war hero who has been inadequately recognized for his actions on D-Day.”

It is clear, the letter says, that Woodson did not receive the medal during World War II “because of the color of his skin.” “We respectfully ask the Army to rectify this historic injustice and appropriately recognize this valorous Veteran with a posthumous recommendation for the Medal of Honor.”

Woodson died in 2005. He spoke to The Associated Press in 1994 about how his landing craft hit a mine on the way to Omaha Beach.

“The tide brought us in, and that’s when the 88s hit us,” he said of the German 88mm guns. “They were murder. Of our 26 Navy personnel there was only one left. They raked the whole top of the ship and killed all the crew. Then they started with the mortar shells.”

Woodson’s widow, Joann, said in a telephone interview Wednesday that for decades her husband never talked about the war or what he’d seen and done on Omaha Beach. It wasn’t until the 50th anniversary of D-Day in 1994 when television stations came to interview her husband that she really heard his stories.

She’s glad his case is getting renewed attention.

“He needs to be given credit for what he did,” she said. “It’s never too late to correct something or to recognize something that should have been done.”

The letter says the Army is preventing a formal review of Woodson’s case because it lacks an original award recom mendation.

But the letter points to a document found by a journalist who wrote a book about African American troops who took part in D-Day.

In her book, “Forgotten: The Untold Story of D-Day’s Black Heroes, At Home and At War,” Linda Hervieux cited a memorandum in the Harry S. Truman Presidential Library that comments on Cpl. Woodson’s bravery.

The memorandum notes that Woodson’s actions merited a Congressional Medal given by the president.

“There is only one medal to which the General could have been referring: the Medal of Honor,” the letter from the Congressional Black Caucus members states.

Woodson enlisted in Philadelphia after graduating from Pennsylvania’s Lincoln University. He attended antiaircraft officers’ training school, one of only two blacks in the course.

But before graduation he was told there were too many antiaircraft officers and was sent back to the 320th for training as a medic.

Woodson went on to study medical technology and worked for 28 years at the Naval Medical Center in Bethesda, Md., and the National Institutes of Health.