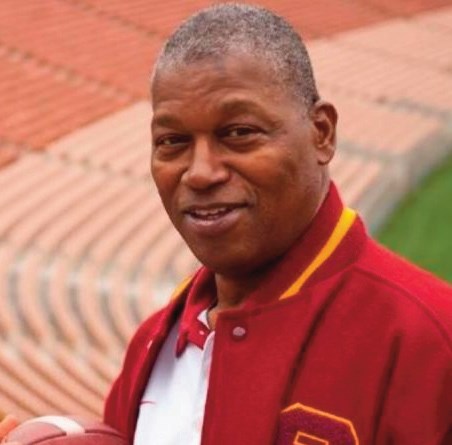 LOS ANGELES (AP) – Sam “Bam” Cunningham, an All-American fullback at Southern California whose performance against Alabama was credited with helping to integrate football in the South and who went on to a record-setting career with the New England Patriots, died Tuesday. He was 71.

He died at his home in Inglewood, according to USC, which spoke to his wife, Cine. She said the cause had yet to be determined.

Cunningham’s younger brother, Randall, starred as a quarterback in the NFL for 16 years.

As a sophomore in 1970 under coach John McKay, Cunningham was part of USC’s all-Black backﬁeld, along with quarterback Jimmy Jones and running back Clarence Davis, which was the ﬁrst of its kind in Division I.

Cunningham ran for 135 yards on 12 carries and scored two touchdowns in his collegiate debut as the Trojans routed predominantly white Alabama 42-21 at Legion Field in Birmingham to open that season. His performance was credited with having influenced the university and coach Bear Bryant to widely recruit more Black players and accelerate the integration of the sport in the South.

“What they saw was the future,” Cunningham told ESPN in 2016. “Their team was eventually going to be integrated.”

In 1971, Alabama had Black players on scholarship for the ﬁrst time and played for the national title. The decade became a standout era for Bryant and the Crimson Tide as they went on to win to more national championships.

Lynn Swann, a teammate of Cunningham’s at USC, said, “The entire SEC, especially Alabama, owes Sam Cunningham a tremendous debt of thanks and appreciation for his play that opened the door to Black athletes in 1970.

“There are a lot of athletes who have done their share and more to end discrimination in so many ways. But Sam opened a huge door in the South and in that conference, which did more for minorities and young Black men to have the opportunity to play in the SEC and get an education.”

Cunningham earned All-American honors in 1972, when he captained the Trojans to a national championship. His record four goal-line TD dives against Ohio State in the 1973 Rose Bowl earned him game MVP honors. He was inducted into the Rose Bowl Hall of Fame in 1992.

He ran for 1,579 yards and 23 touchdowns in his career, including 13 TDs in 1972. The Trojans had a record of 248-2 during his three years when Cunningham earned the nickname “Bam” for his bruising goal line dives.

“It became a bit of a legend with Sam going over the top of an offensive line,” Swann said. “Nobody could stop him.” Cunningham was taken 11th overall in the ﬁrst round of the 1973 NFL draft by the Patriots. He became the franchise’s career leading rusher with 5,453 yards over nine seasons, while also catching 210 passes for 1,905 yards. He scored 49 touchdowns – 43 on the ground.

He was a Pro Bowl selection in 1978, when the Patriots set an NFL record for rushing yards as a team with 3,165. The mark stood until 2019, when it was broken by the Baltimore Ravens.

Sam `Bam’ Cunningham was one of my favorite players throughout the ’70s and my sons all loved him,” said Patriots chairman and CEO Robert Kraft, who bought the team in 1994. “As much as I admired him as a player, my affection for him only grew after spending time with him and learning more about him as a person. He made a tremendous impact, both on and off the ﬁeld, and was beloved by his teammates.”

Cunningham was inducted into the College Football Hall of Fame in 2010, the same year he went into the Patriots Hall of Fame. He also was a member of the USC Athletic Hall of Fame.

After his playing career, Cunningham worked as a landscape contractor in California. He was born and raised in Santa Barbara.

Besides his wife, he is survived by daughter Samahndi, two other brothers Bruce and Anthony, niece Vashti Cunningham, a world champion high jumper, and nephew Randall II.

Next post George Strickler, attorney who fought for civil rights, dies at 80