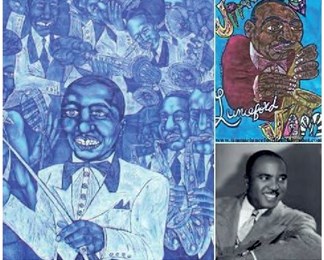 “Jimmie Lunceford has the best of all bands. Duke (Ellington) is great, (Count) Basie is remarkable, but Lunceford tops them both.” – Legendary swing band leader Glenn Miller “The music still sounds good, and it still inspires me, you know. I just think that band had everything. It was just one helluva band.” – Jazz great Horace Silver

“Manassas had the first orchestra of any school in the city with Mr. Lunceford. He was a good disciplinarian, a good teacher, and the students just had a fit over him. Lunceford played sophisticated jazz. I used to practice with them.” – Kathryn Perry Thomas, Memphis educator, Manassas High Class of 1932 “He would come over to the school each and every time he would play Memphis. His band would perform for the (Manassas) student body, and our band, the Little Rhythm Bombers, would play for him. This is where most of us, as students, saw him. He would bring the big band over to Manassas and perform.” – Memphis music great, educator, Manassas Rhythm Bomber Emerson, Jr.

“Jimmy Lunceford was buried here in Memphis. The spot he occupies should have something of a special significance. … He took a group of relatively unsophisticated Memphis colored boys and welded them into an organization which scaled the heights of musical eminence. … He presented something new in the way of musical presentations by Negro orchestras. Lunceford and many others like him chose to remain at home, and with their people. (His death) should have meaning in inspiration and guidance to others. If we permit it, Lunceford’s burial in Memphis can mean this.” – Legendary Memphis Educator and syndicated columnist Nat D. Williams

The purpose of the festival is to increase awareness of the legacy and music genius of Lunceford, a.k.a. “The Father Of Memphis Music Education” and “The King Of Swing,” and to instill community pride in the achievements and accomplishments of a proud Memphian who never forgot Memphis.

The JLJF through several initiatives seeks to instill pride in the Memphis City Schools and greater Memphis community by developing a strong advocacy campaign for the promotion of music education, and appreciation by building upon the historical model pioneered by jazz great Lunceford.

The JLJF also works to promote and document the Lunceford legacy through collaborative initiatives and projects with Memphis area cultural and educational institutions, the greater Memphis community and other interested individuals and entities worldwide and beyond.

Lunceford was considered a true advocate of constructivist theory because becoming knowledgeable involves acquiring the symbolic meaning structures appropriate to one’s society, and, since knowledge is socially constructed, individual members of society may be able to add to or change the general pool of knowledge.

By voluntarily introducing music education into the Memphis City Schools system, and arguably starting the first ever jazz studies program ever taught at a public school in the United States, Lunceford did just that, in true maverick pioneer style no less.

Lunceford’s remains and wonderful legacy are interred at the famous Elmwood Cemetery. In years to come the JLJF plans to initiate a citywide cultural awareness campaign 70 years in the making.

In observation of his 117th Life Affirmation Day and 72nd anniversary of his death, the JLJF has events planned in June and Fall 2019 throughout the Memphis area to celebrate the unsung hometown hero and music genius.

The purpose of the JLJF is not only to entertain but to also disseminate to educate to liberate.

The JLJF is trying to get more junior and high school jazz band directors aware of the accomplishments of one of their own in order for them to raise the level of expectations of themselves in terms of teaching and leadership as well as of their students in terms of self-awareness (self-esteem) and musicianship.

Memphis Music owes a debt to the visionary and pioneering efforts of Jimmie Lunceford, organizers said, noting that he thought enough of Memphis that he decided to be buried there.

For other information visit jimmieluncefordjam.blogspot.com.