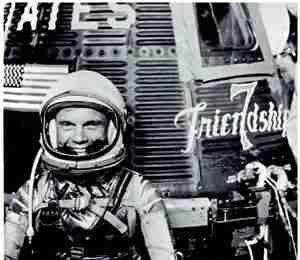 By DAN SEWELL and ANDREW WELSH-HUGGINS

COLUMBUS, Ohio — John Glenn will lie in state in Ohio’s capitol building before a celebration of his life of military and government service and two history-making voyages into space.

Glenn’s body will remain in the Ohio Statehouse Rotunda from noon to 8 p.m. Friday and remain there overnight, then to be carried up High Street to Ohio State University on Saturday (Dec. 17) for a public memorial service at Mershon Auditorium at 2 p.m. The event will be open to the public but tickets are required. They will be available through the college’s website starting today (Dec. 15).

Glenn, who died Thursday (Dec. 8) at age 95, was the first American to orbit the Earth, in 1962, and was the oldest man in space, at age 77 in 1998. A U.S. Marine and combat pilot, he also served as a Democratic U.S. senator, representing Ohio, for more than two decades.

Last Friday (Dec. 9), Democratic President Barack Obama ordered flags at federal buildings and on ships around the world flown at half-staff until sunset on the day of Glenn’s internment. Glenn is to be buried at Arlington National Cemetery near Washington, D.C.

Tributes from the nation’s leaders and others continued (last) Friday.

“Throughout his life, Senator John Glenn embodied the right stuff,” Defense Secretary Ash Carter said in a statement. “Our military in particular benefited from his courage and dedication. … But just as important as what John Glenn accomplished is how he accomplished it: with a combination of fierce determination and profound humility, and always with integrity.”

Glenn was a fighter pilot in World War II and Korea and served on the Senate Armed Services Committee, among other Washington service.

In his eastern Ohio hometown of New Concord, the John and Annie Glenn Museum, usually available this time of year only for special tours and events, opened last Friday with free admission.

Char Lyn Grujoski, of Connersville, Indiana, stopped in after spotting a roadside sign for the museum while driving home from Pittsburgh and listening to a radio report on Glenn. The museum is in the astronaut’s converted boyhood home. Grujoski and her daughter left impressed. “He was a true American hero, someone who loved his country and served it,” she said.

Glenn was known for his humility, said Hal Burlingame, who grew up in New Concord and was friends with Glenn for half a century.

“John Glenn that you see is the real John Glenn,” Burlingame said. “He would be the same John Glenn if he happened to be sitting here today talking with us. He never took himself too seriously.”

Glenn was born July 18, 1921, in Cambridge and grew up in nearby New Concord. He wed his childhood sweetheart, Anna Margaret Castor, in 1943. The couple spent their later years between Washington and Columbus.

He and his wife served as trustees at their alma mater, Muskingum College, and he promoted his namesake School of Public Affairs at Ohio State, which houses his private papers and photographs.

His long political career, which included a failed 1984 run for the Democratic presidential nomination, enabled him to return to space in the shuttle Discovery in 1998, 36 years after going into orbit in Friendship 7 as part of Mercury, the first U.S. manned spaceflight program. He turned his Discovery mission into an educational moment about aging.

Schools, a space center and the Columbus airport are named after him.

“For generations, Americans cheered John Glenn as he soared into the heavens,” former House Speaker John Boehner, a Republican and fellow Ohioan, said in a statement. “Now he has taken his place there for eternity, a well-earned reward for an American life well and heroically lived.”

Sewell reported from Cincinnati. Associated Press writers Mike Householder in New Concord and Mark Gillispie in Cleveland and AP Science Writer Seth Borenstein in Washington contributed to this story. Excerpts from an updated story by Julie Carr Smyth were also included in this report.