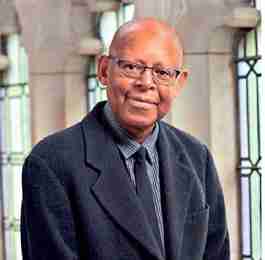 James Cone, theologian and author of “Black Theology & Black Power,” has died at the age of 79. Cone’s writings and teachings connected religion with social issues.

NEW YORK (AP) – Theologian James Cone, who as a founder of black liberation theology linked Christian faith with the struggle against racism and oppression, has died. He was 79.

Cone was hospitalized last week and died at Memorial Sloan Kettering Cancer Center on Saturday, a spokeswoman for Union Theological Seminary said. The cause of his death wasn’t released.

In his work, Cone connected the words and lessons of the Bible to the fight for liberty and equality by black Americans, saying God and Jesus’ messages were about social justice and freeing people from oppression and not just waiting for the hereafter. His 1969 book, “Black Theology & Black Power,” has been a seminal text in the field.

“To say his death leaves a void is a staggering understatement,” Jones said in a statement announcing the death. “His prophetic voice, deep kindness, and fierce commitment to black liberation embodied not just the very best of our seminary, but of the theological field as a whole and of American prophetic thought and action.”

Cone’s efforts to connect theology and social issues continued throughout his career. In November 2017, he received the Grawemeyer Award in Religion, a $100,000 prize, for his 2011 book, “The Cross and the Lynching Tree.” The book makes connections between Jesus’ crucifixion and the lynching of black people in the United States.

Cone had been on sabbatical this academic year to write another book, a memoir called “Said I Wasn’t Gonna Tell Nobody,” which is to be published this year. His editor shared some of what he had written for the book’s conclusion in Union Theological Seminary’s statement on his passing.

Cone was born in Fordyce, Arkansas. He was an ordained minister in the African Methodist Episcopal Church. He is survived by his brother, two sons, two daughters and two grandchildren.