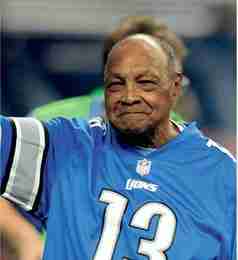 DETROIT (AP) – Wally Triplett, the trailblazing running back who was one of the first African-Americans drafted by an NFL team, has died. He was 92.

The Detroit Lions and Penn State announced Triplett’s death Thursday. Triplett was the third African-American selected in the 1949 draft, but he was the first of those draftees to play in a regular-season game. He played in 24 games for the Lions and Chicago Cardinals.

“This is a tremendous loss for not only our football program, but the Penn State community as a whole,” Penn State coach James Franklin said in a statement. “Wally was a trailblazer as the first African-American to be drafted and play in the NFL, and his influence continues to live on. He had a profound effect on me and the team when he visited in 2015 and shared valuable lessons from his life story and ability to overcome.”

Triplett was inducted into the Cotton Bowl Hall of Fame this year, and his appearance in that game is part of Penn State lore. According to the school, the team was asked to consider the possibility of leaving Triplett and Hoggard at home for the game in then-segregated Dallas. Teammates responded by saying: “We are Penn State, there will be no meetings” – a reference to a previous Penn State team that voted to cancel a game at segregated Miami.

The story remains an important part of Penn State history, especially given the school’s well-known “We Are” moniker.

“As the first African-American to be drafted and to play in the National Football League, Wally is one of the true trailblazers in American sports history. He resides among the great men who helped reshape the game as they faced the challenges of segregation and discrimination,” the Lions said in a statement. “His contributions date back to his days at Penn State as the Nittany Lions’ first African-American starter and varsity letter winner, highlighted by his appearance in the first integrated Cotton Bowl. Wally’s legacy also reaches beyond breaking color barriers, having served in the United States Army during the Korean War.”

George Taliaferro was the first black player drafted in the NFL when he went six rounds before Triplett in 1949. Taliaferro also died recently.