Tributes for Brooklyn DA Kenneth Thompson after death from cancer 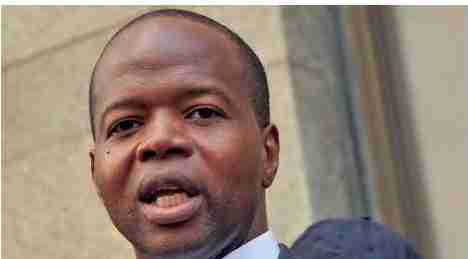 NEW YORK – Brooklyn District Attorney Kenneth Thompson, the first African- American to hold the office and whose career included internationally high-profile cases in private practice as well as a stint as federal prosecutor, died Sunday after a battle with cancer, just days after announcing he would be undergoing treatment. He was 50.

Thompson’s family said he died at Memorial Sloan Kettering Cancer Center. “Ken was a dedicated public servant who embodied the highest principles of the law, and his grand presence will be sorely missed,” said Gov. Andrew Cuomo. He said flags would be flown at half- staff on Monday in tribute to Thompson.

New York City Mayor Bill de Blasio said, “With a life and promise cut far too short, our city was blessed with but a glimpse of Ken’s unwavering commitment to justice and his unrivaled pursuit of a more fair system for all those he served.”

Thompson had announced last Tuesday that he would be taking absences from his position to undergo treatment for cancer, saying, “As a man of intense faith, I intend to fight and win the battle against this disease.” He didn’t specify what kind of cancer he had.

Thompson defeated longstanding office holder Charles Hynes to take over the district attorney’s office in January 2014. In his tenure, the office expanded an initiative that reviews cases for potential wrongful convictions. He also prosecuted Peter Liang, a New York Police Department officer who was tried in the death of an unarmed black man in a housing project stairwell. Liang was found guilty of manslaughter, but a judge downgraded it to criminally negligent homicide. Thompson decided against seeking prison time in sentencing.

“He was a giant among those seeking to reform the criminal justice system and we are all privileged to have worked under his transformative leadership these past three years,” said Chief Assistant District Attorney Eric Gonzalez.

During his time as a federal prosecutor, he prosecuted the case against a police officer accused in the 1997 assault of Abner Louima in a precinct bathroom.

Thompson was born and raised in New York City, the son of a police officer. He earned his law degree from New York University School of Law.

Thompson is survived by his wife and two children, as well as his mother, father, brother and sister.