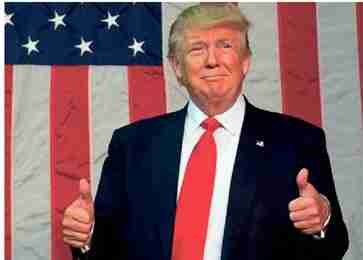 America, come on now, this guy can’t stay in the White House; he definitely can’t stay past 2020. Hopefully Donald J. Trump will have to resign before his only term as president ends. Get him and his inner circle of people out of our United States government and let the U.S. Attorneys Office of the Southern District of New York deal with Trump and his family as an alleged criminal enterprise.

With Trump out, a new dilemma looms large: out of what manner of mediocrity comes the promise of many politicians hungry for presidential power who will vie for the 2020 party nominations. If, somehow, Trump were to survive and run for reelection in 2020, he’d probably have little or no Republican primary opposition. Then he would again lose the General Election’s popular vote only to win the Electoral College vote because of red state primacy.

That is the possible scenario today. However, by next week – maybe sooner, and it could be later – Trump’s troubles may make his survival come to an end next year, in 2019! But, barring any chump! equivocation by Congress, we, the people, must demand that if the charges warrant that Trump must go, then Trump must go; Period.

So many democrats promise to line up for their party’s 2020 presidential nomination that, already, fear exists that the ensuing confusion and cut-throat political warfare and race related issues will tear the already fractured party from its fragile moorings. The Democratic Party base of registered black voters sent a message to white party bosses in 2016 via non-expected weak support of Hillary Clinton. The political plantocracy ain’t working like it used to be.

Most discerning black Republicans have not spoken out in support of Trump, noting privately instead their displeasure with his vicious white nationalist rallying of America’s mammoth far right constituency. This fascistic bent that many white Americans – of all political parties – historically cleave to, is the inevitable nexus of this nation’s disassembling. Trump and his ilk are fully aware of the brewing consequences afoot, and they believe that the ensuing frenzy will be beneficial for white America.

What must be thoroughly understood by all Americans with melanin – people who are “non-white” – is that so-called white people tend to have a deep seeded inferiority complex, because they are the only human beings who cannot produce skin color and therefore call themselves white, which, of course, they are not. Genetic inferiority causes fear of genetic annihilation, and these people tend to both seek sexual union with people of color and to kill us.

PHOTO COURTESY OF SECURE.DONALDJTRUMP.COM After the “Central Park Five” black boys falsely accused of raping a white woman in the park were exonerated and finally awarded $41 million due to serving between 6 and 13 years behind bars, Donald J. Trump wrote in the New York Daily News that the settlement was “a disgrace.” Trump also said that the five were still probably guilty. Years before, when the five were arrested, Trump took out full page ads in all the New York papers against the boys before their trial.

If you don’t remember that, what about Trump’s consistent false charge that Barack Obama was born in Kenya and therefore could not be an American president? What about Trump’s consistent negative speech concerning people of color? Remember the Muslim father and mother whose hero son gave his life in combat and how Trump demeaned them? Can you ever forget Puerto Rico or the Hispanic families tricked into forgoing their rights and having their children surreptitiously snatched and sent to only God knows where?

There’s been this hate filled presidency, this haunting negativity, even turning a righteous demonstration against police brutality of black men and boys into a white nationalist campaign. Donald J. Trump and his trumpism must go. They are un-American! Did Trump steal the presidency by wrongdoing? Did he bring a criminal enterprise into the White House? Did Trump direct two finance campaign felonies?

Has he defrauded the American people per the emoluments clause of the U. S. Constitution? What does his Russia activity actually mean?