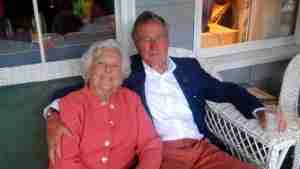 Another icon passes. Barbara Bush, matriarch of the Bush family (the most influential family in the Republican Party and in politics) has passed at the age of 92. She will be sorely missed, but she has gone on home to be with her daughter, Robin, who died of Leukemia at the age of three.

I was blessed to have spent a little time with her – just a few hours, but those hours left an indelible imprint on my life. My heart is heavy as if she were a member of my own family. She was, of sorts, because of my love for her son, Jeb.

It was through her son, Jeb Bush, that I got a chance to meet her. Jeb partnered with the Miami Urban League and its president, T. Willard Fair, to create the first charter school in the State of Florida.

The Liberty City Charter School was where I met Barbara Bush. Jeb was on the board as was my oldest daughter, Cheri Howard Perry.

One day the school had a small private event for the kids, several of which were my grandchildren, Cheri and her husband Carl’s children. I remember how Jeb would tease me as he reminded me that at the Liberty City Charter School I was not important – my child was and my grandchildren were.

Jeb sat in the middle of the school’s playroom surrounded by the students. These little Black kids loved him. They would climb on his back and sit on his lap and wrap themselves in his arms.

But this day, Jeb wasn’t the only special person there. He was accompanied by his mother, Barbara Bush. I watched her beam with pride as she looked at her son being swarmed by these little Black kids, hugging and kissing him.

He was the Governor of Florida by then, but today he was just her son surrounded by loving children. And she was so proud. I’m not sure, but I think I remember her wiping her eyes with tears of joy and pride.

She had taught her children how to love and how service was their highest calling. And I was proud that my child was serving alongside her child. Ironically, she passed on my daughter Cheri’s 55th birthday, April 17th.

It would hurt me when I moved throughout the Black community or watched CNN and would hear nothing but negative stuff about the Bush family, especially Jeb and President George W. Whatever they said about them always either began or ended with, “You know the Bushes are racists”.

Even children would repeat it. I remember one day I was giving a speech to a group of young Black kids in Coconut Grove and when I mentioned that I had done Jeb’s campaign for Governor, one little girl yelled, “I hate Jeb Bush”. She had to be only about 10 or so. I told the kids about my personal experience with Jeb.

I can only wonder how it must have hurt Barbara Bush to hear people call her sons racists. She didn’t raise her children that way. She raised them to love everybody. In fact, most people don’t know it, but her son Neil Bush sat on the board of the United Negro College Fund (UNCF) for years and raised more money for Black students to go to college than all the other board members combined.

I was privileged to meet three of her sons – Jeb, Neil, and G. W. (as I called POTUS) – and her grandson, Jeb Bush, Jr. and Jeb’s wife, Columba.

Barbara Bush was about the life that Jesus wanted her to live. She taught her children, her grandchildren and her great, grandchildren how to live as true Christians – how to serve. She was a virtuous woman.

Barbara Bush was not only a crown to her husband, POTUS #41, but also to her son, POTUS #43 and to the entire Republican Party. They should remember her legacy and Congress should return to the civility she embodied.

Rest in Peace Barbara Bush. The world will truly miss you. I know I will. I can hear Jesus say, “Servant, well done.”

Next post NAACP Statement on Starbucks: A growing climate of racism and intolerance