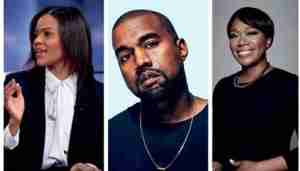 PHOTOS COURTESY OF WIKIPEDIA AND KUWKIMYE.COM

So Liberal turned Conservative Candace Owens took on Black Lives Matter protestors who blatantly tried to disrupt a forum. They were given the opportunity to go to the microphone and ask intelligent questions, but as usual, they chose to scream at her.

Then this young lady brilliantly shut them down. But the real story came when Kanye West tweeted that he “liked the way she thinks.” Then the liberal media almost had a stroke. How could this raunchy mouth hip-hop artist step off the Democratic plantation in order to agree with this conservative chick?

The vitriolic tweets and ugliness from liberals, including those on CNN and MSNBC, were downright ludicrous. They painted Owens as nothing but a stupid Right Wing troll. But it was Kanye they really went after. He had betrayed his blackness. He had lost his mind. He was now mentally deranged and should turn in his Black Card – merely because he agreed with Candace Owens and the way she looked at how we should and could take advantage of living in the greatest country in the world and stop playing the victim card.

I was so impressed as I listened to Owens that I watched several of her You Tube videos. She was funny, edgy, thoughtful and very right. The video she did entitled “The Left Thinks Black People are Stupid” was hilarious as she talked about how Hillary said she traveled with hot sauce in her purse.

Everyone should view Candace’s You Tube video, entitled “WTF? Black Lives Matter Has A List of Demands for White People!” It will make your jaw drop, especially when you discover that Black Lives Matter is funded in part by white Socialist billionaire George Soros. It’s the epitome of hypocrisy.

But the Left wants to demonize Candace Owens and wants to castigate Kanye West for agreeing with her. It is obvious that the only thoughts black folk are allowed to have are those approved of by Liberals/Democrats and will be vilified for having conservative values and becoming registered Republicans.

If you are nasty and mean-spirited to Republicans like comedian Michelle Wolf was to White House Press Secretary Sarah Huckabee Sanders at the recent White House Correspondents Dinner, then the Left will hold you in high esteem.

That brings me to Joy Reid. Joy has made her career on MSNBC by ridiculing and demeaning Republicans on all levels – local, state and national offices. But she has come under fire for some very nasty tweets she supposedly wrote some years back about gays and lesbians. Then Joy denied she wrote those negative things about the LGBTQ community, which she says she supports.

According to The Blaze, “Months after homophobic posts emerged from MSNBC host Joy Reid’s former blog, new details prompted LGBTQ advocacy group PFLAG National (the nation’s first and largest organization for lesbian, gay, bisexual, transgender and queer people, their families, and allies) to rescind an award (Straight for Equality in Media award) it had given the journalist.”

She originally claimed that her site was hacked and that’s how those antigay tweets appeared. She even talked about calling the FBI to investigate. But Saturday, as Fox News reported, “she kinda-sorta admitted writing homophobic slurs” and “apologized profusely.” So she lied, but then kinda-sorta came clean.

Again the mainstream media blew up; but MSNBC and NBC stood firmly behind her for “not remembering” some of the things she wrote years ago. Some of the things she posted, many of us may have agreed with, but because Liberals demand that we all be “politically correct” (PC), anybody who admits to being “politically incorrect” is vilified and may even face violent blowback, ask Vice President Mike Pence.

In fact, according to Patriot News Alert, California is pushing legislation (AB 2943) that will make it an “unlawful business practice…efforts to change behaviors or gender expressions, or eliminate or reduce sexual or romantic attractions or feelings towards individuals of the same sex”.

In essence, moral values that have been in effect for thousands of years and have been practiced because of dictates of the Holy Bible will now be deemed illegal. This bill could effectively ban the sale of the Bible.

This is one of the reasons that Joy Reid is being vilified. She had to apologize or else the radical Left will take away her Black Card. They forgave her because they need her to vilify us Republicans.

So last week three well-known black TV personalities sent Liberal white folks into a tailspin because of something they said.

Next post Black entrepreneurs to attend Summit in Charlotte