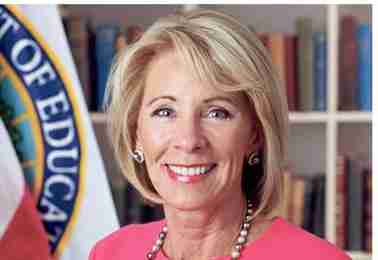 On behalf of The Leadership Conference on Civil and Human Rights, a coalition charged by its diverse membership of more than 200 national organizations to promote and protect the civil and human rights of all persons in the United States, and the 112 undersigned national, state and local organizations, we write to share our significant concern regarding the Department of Education’s reported contemplation of the use of Student Support and Academic Enrichment grants provided to states under the Every Student Succeeds Act (ESSA) for purchasing firearms and firearms training for school staff.

The Department’s consideration of this use for the funding is inconsistent with both congressional intent and evidence-based educational practices, working against ESSA’s purpose to “provide all children significant opportunity to receive a fair, equitable, and high-quality education, and to close achievement gaps.”

Having more firearms in schools would expose children and school staff to a greater risk of gun violence and make everyone in schools less safe. The Department must immediately publicly clarify that ESSA funds cannot be used for weapons.

ESSA is not intended to fund firearms and does not state that funds can be used to bring weapons into schools. In fact, the law provides that local education agencies can use Student Support and Academic Enrichment grants to implement drug and violence prevention activities and programs that create and maintain school environments that are “free of weapons.”

One hundred and seventy-three members of Congress, several involved in writing ESSA, have clarified that it was not intended to be used for the purchase of firearms.

Additionally, Congress has indicated in other laws its intention to limit the presence of firearms in schools and prohibit the use of federal funds for firearms. More than 25 years ago, Congress passed the Gun-Free School Zones Act prohibiting unauthorized firearms from being carried onto school grounds.

And just earlier this year, Congress passed the STOP School Violence Act to provide money to states and localities for school safety and explicitly prohibited the funds from being used on firearms or firearms training.

Research shows that students are safer and learn better when their schools are supportive and welcoming, and there is no evidence to show that increasing the number of available firearms makes students any safer. Evidence-based and promising programs such as Positive Behavior Interventions & Supports (PBIS), Multi-Tiered Systems of Support (MTSS), and restorative practices, as well as increased student support like mental health services and counseling services, are widely recommended by educational experts to improve school safety and climate. However, there is no evidence showing that guns make people safer.

In fact, increasing the number of firearms in schools would make children and school staff less safe. When people have greater access to guns, more people are killed with guns. Even in cases of self-defense, firearms do not make people safer.

Having a gun does not reduce the risk of injury during a crime over other forms of protection. Firearms pose unacceptable safety risks to children and school staff even when used by trained personnel.

When involved in gunfights, trained police officers hit their intended targets less than 20 percent of the time. And the risk is even greater for children and teachers of color, with research consistently showing that negative stereotypes about race affect split-second decisions like discharging a firearm, even defensively, putting people of color at greater risk of being injured or killed.

In conclusion, any decision or recommendation by the Department allowing schools to use ESSA funds for weapons would be contrary to congressional intent and pose serious danger to children and their teachers. It would funnel money away from the intended purpose of ESSA to improve educational services and close achievement gaps. The Department must immediately publicly clarify that ESSA funds cannot and should not be used for firearms or firearm training.

If you have any questions or need additional information, please contact Liz King, education program director at The Leadership Conference, at king@civilrights.org or (202) 466-0087 or Nicole Dooley, policy counsel at the NAACP Legal Defense and Educational Fund, Inc., at ndooley@naacpldf.org or (202) 682-1300.

Next post Prisons strike across the country amid media silence