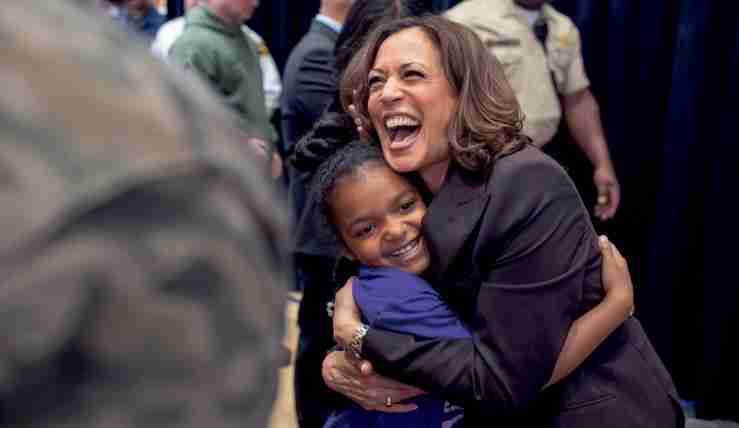 If born in the USA, that means something very different than if a “colored’ girl is born in India, Liberia, Trinidad-Tobago, Bermuda, Mauritius, Ethiopia, Malawi, Bangladesh, Thailand, Gabon, and other countries which have had, or currently have elected women presidents or prime ministers.

Those countries which elected those ‘colored’ females to the highest roles of leadership, are doing just ﬁne, thank you. But here? The specter of having a woman of color assume the position (of power) has set off so many people, and has taken the debate about race, gender, country of origin, caste/class, etc., to a ridiculous low.

Only in the USA do we continue to twist ourselves in knots over the efﬁcacy of having a woman at the top as an elected leader – to tear her into the tiniest pieces; looking at every component of her being, overlooking her qualiﬁcations and focused on what’s underneath her pants.

Now that Kamala Harris is running for vice president on the Democratic ticket, all the notions of being a female, and one “of color,” in a powerful position, are being examined.

That women can lead is a mute issue.

But this is the United States of America and we are constantly reminded about the history of the hierarchy of white, male, Christian dominance.

Make no mistake. White males have an agenda: to remain on top, by any means necessary.

Their dominance literally colored the water (until the 1960s), and permeates the infrastructure of policies, practices, and their self-interested promotion, across all of this country’s systems and institutions.

This year, the Suffragette movement is being celebrated for having reached a milestone: the passage of the nineteenth amendment, which gave women, albeit mostly white women, the right to vote.

But winning the right to vote was a ﬁght. Interestingly, many white women opposed the movement and offered, as one of their main arguments – which still resonates today – that their economic standing was tied to their husband, and that was the more comfortable position for them- at that time, as well as now.

And even though Black women were part of that movement, universal voting rights were impeded by States rights which continued to repress the Black vote at-large until passage of the Voting Rights Act of 1965.

So here we are in 2020, and the “suburban housewife” that political pundits refer to are the same class of women who held up the right to vote; who rallied against Equal Rights Amendment; who fueled the growth of the Tea Party; who are the backbone of the Evangelicals, who support Trump.

What does a woman of color do?

Kamala Harris checks a lot of boxes, but she is undeniably ‘colored’, and proclaims her blackness (Howard University undergrad Alumna; AKA Sorority member, etc.)

Since the announcement of Harris as the vice-presidential candidate, there has been a tremendous surge of energy unleashed in the political discourse. We have been waiting for such an infusion.

We must not squander this momentexercising our right and duty to vote – on triviality.

Arguments about Kamala’ skin color, her parent’s immigrant background, her gender, her marriage partner, her past life choices, should not matter.

Short of her being a convicted felon with two heads, Kamala Harris, along with Joe Biden, offers us a viable choice to right the path of this nation. As Michele Obama reminded us on the opening night of the Democratic National Convention, we have to vote “as if our lives depended on it,” because they do.

With that winning combination of Biden/Harris, we might be able to feel like we have a chance to fully participate in the electoral process; that we might have more seats at the decisionmaking tables; and, that having a woman on the winning ticket to the highest ofﬁce of the land gives 50 percent of the population equal representation – beyond just having the right to vote.

And, that we might, once again, look forward to a woman as President of The United States of America. 2024?