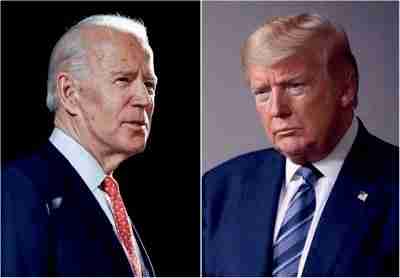 The nation entered this election year still pondering Special Counsel Robert Mueller’s April 18, 2019, report which all but accused President Donald Trump of obstructing an investigation of possible collusion with Russia to interfere in the 2016 election.

The year ended with the Democraticcontrolled House of Representatives impeaching the president on December 18, 2019, on charges of abuse of power and obstruction of Congress, alleging he tried to strongarm Ukraine into launching a probe of a political adversary. The Republicandominated Senate acquitted Trump on Feb. 5, 2020.

By then, the ﬁrst case of coronavirus infection in the U.S. was conﬁrmed on Jan. 20 and reported to the Centers for Disease Control and Prevention (CDC) two days later. In early September, journalist Bob Woodward released audio recordings of the president acknowledging, back in February, that the virus was “deadly” but that he did not tell the nation to avoid creating panic. Publicly, he predicted the virus would pass “almost like magic” within days and few people would die.

But, so far, COVID-19, the disease which the virus causes, has killed nearly 220,000 Americans and infected eight million others. It also forced the shutdown of much of the economy, resulting in more than 20 million Americans being unemployed and almost a million ﬁling for jobless beneﬁts weekly.

Then, at 12:54 a.m. Oct. 2, the president, who ridiculed advice from experts, such as wearing a mask, announced that he and First Lady Melania Trump had contracted COVID-19. Trump was taken to Walter Reed National Military Medical Center, where he spent three days and was administered experimental drugs. Just a week later, he hosted an event on the White House Rose Garden while standing on a balcony, still not wearing a mask, and has resumed campaigning in person. His message to the nation on being infected: “It was a blessing from God … Don’t let it dominate you.”

On June 1, heavily armed federal agents, some without identiﬁcation badge, forcibly broke up a peaceful protest outside the White House so the president coud have a photo op.

In late September, The New York Times reported that Trump paid no federal income taxes for 10 years, just $750 for each of two years and has debts of more than $440 million. Also, more than 200 entities, including foreign governments, received major beneﬁts for donating to Trump’s reelection campaign or to his super PAC. Trump called on the Senate to conﬁrm ultra-conservative judge Amy Coney

Barrett before the Nov. 3 election to replace the late ultra-liberal Ruth Baber Ginsburg on the U.S. Supreme Court. Senate Majority Leader Mitch McConnell, who refused for almost a year to allow consideration of Barack Obama nominee Merrick Garland, pledged to make it happen within weeks.

Most recently, federal authorities announced the arrest of 13 people on Oct. 8 on charges of plotting to attack Michigan’s Capitol and kidnap the governor, Gretchen Whitmer. In April, Trump sided with armed men who stormed the Michigan legislative building and demanded that Whitmer revoke her orders to close the state to counter the virus. Trump tweeted, “LIBERATE MICHIGAN!” He has consistently criticized the governor, including on the morning when the arrests were announced, and has not denounced the plot or called the governor.

Trump launched a sustained attack on mail voting, which is expected to be substantial because of voters’ fear of the virus. He criticized the United States Postal Service and appointed a crony to head the agency who promptly began removing high-speed sorting machines and cutting back on operations generally. Meanwhile, many states under his party’s control have stepped up efforts to frustrate Democratic voters and outright suppress the ballot, including ﬁling hundreds of nuisance lawsuits.

None of this is new information but, taken together, an astonishing picture emerges of inept leadership in a time of crisis.

Polls show Trump trailing Joe Biden by between 10 and 16 points nationally and narrowly in so-called “swing” states that gave Trump enough Electoral College votes to win in 2016 despite losing to Hillary Clinton by nearly three million popular ballots. He is obviously hoping for a repeat. It should be amazing, given his record just this year, that he has even that level of support but he is backed by up to 40 percent of the electorate and owns the Republican Party which conservative evangelical leaders, political activists and billionaires hijacked and turned over to him.

Trump and Republicans know that, because of changing demographics, they are a minority party. He wants to win and not be a one-term “loser.” The powers behind him want it so they can ﬁnish their reverse revolution, motivating their supporters to defend God, guns and country – buzz words for low corporate taxes and fewer business and industry regulations.

Democrats are not homogenous, comprising moderates, progressives and social democrats and this ideological diversity can damper voter turnout. But, this time, they appear to be bonding over one common factor: disgust with Trump. Polls say they are in good company. ###

Next post Stocks are soaring, and most Black people are missing out