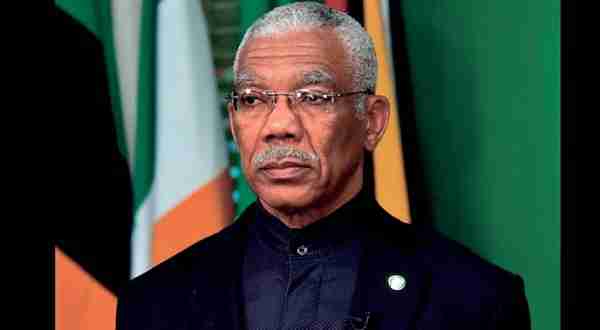 The dreaded oil curse seen in some small countries which became suddenly wealthy and which some commentators have been warning Guyana about has struck even before the expected billions of dollars has come on stream from newly discovered eight billion barrels of oil deposit. The ﬁrst shipment had barely left before violent unrest erupted. It was not about petro-dollar corruption, which was the fear, but the original bane of Guyana – tense race relations mixed with politics. This time it is over the purported result of the March 2 general election and the attendant turmoil is as wholly unnecessary as it is distressing.

At the center of the dispute is the initial announcement that the ruling coalition of A Partnership for National Unity (APNU) and the Alliance for Change (AFC), headed by President David Granger, has won the election. Up to then, the main opposition Peoples Progressive Party-Civic (PPP) was ahead by 51,000 votes but the Region 4 results put the APNU/AFC in the lead by 59,071, equal to a one-seat majority in the 65-member parliament. The PPP instantly rejected those results and they were criticized by international observers.

There was an unusual delay in posting the Region 4 results, which immediately led to suspicion that the overall outcome was being rigged. It did not help that the results were posted without the required veriﬁcation and, also, that the government used the courts and the compilation of a new voter list to stall for more than a year the holding of the election after losing a parliamentary vote of no conﬁdence which required it to resign within 90 days.

Still, there were reports that APNU/AFC was getting ready to accept the results and Granger would be sworn into ofﬁce for another term. The PPP sued to block such a development. Also, ofﬁcials from the U.S., Britain, Canada and the European Union expressed concern over allegations of fraud. “We call on President Granger to avoid a transition of government which we believe would be unconstitutional as it would be based on a vote tabulation process that lacked credibility and transparency,” they said in a joint statement on Friday.

Guyana politics since the late 1950s. The concern is that with the historical animosity now unleashed, it will take a long time for it to be suppressed. If verifying the Region 4 poll result conﬁrms a victory for the APNU/AFC coalition, PPP supporters will insist they were robbed. If the PPP is declared the winner, APNU/AFC members will refuse to accept the result as fair.

The APNU/AFC coalition was probably hoping that it would get enough crossover votes from Indo-Guyanese to return to power, propelled by long-standing dissatisfaction over allegations of massive corruption which dogged the PPP while in ofﬁce. The PPP, on the other hand, must have been hoping that government’s closure of much of the sugar industry — a bulwark of IndoGuyanese economic power – and the attendant loss of 7,000 jobs would have forestalled any such defections.

Chief Justice Roxanne George Wiltshire, who upheld the no-conﬁdence vote and was supported by the Caribbean Court of Justice (CCJ), ruled on Saturday that she has jurisdiction to hear a legal challenge by the PPP to the way the Region 4 votes have been handled. She was due to start hearing arguments starting this Tuesday. She could allow the results, as currently published, to stand and conﬁrm APNU/AFC as the winner or order that the Region 4 votes be veriﬁed, with the possibility that the PPP could be declared the victor. Her ﬁnal ruling will probably be appealed to the CCJ, the country’s highest judicial body.

Whatever that outcome, this much is certain: one side will be very unhappy. And that dissatisfaction and its potential for large-scale violence, as seen in the early 1960s, will permeate Guyanese politics for the foreseeable future. The one solution still is for APNU/AFC and the PPP to form a coalition government so as to discourage the racial flareups which periodically haunt the nation and ensure the billions of dollars in revenue coming from the oil industry is fairly managed for the beneﬁt of all Guyanese. If the political leadership cannot work out a power-sharing formula, the people must force them to do so.