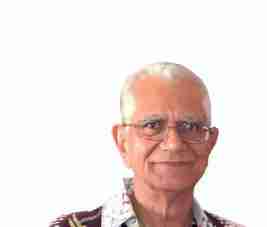 America is controlled by corrupt Democratic politicians, movie and media moguls, and FBI and CIA operatives, who worship the devil, run a child sex ring and a drug cartel, start wars and plan to establish a new world order to replace traditional Western values. This secret cabal not only created the coronavirus but pays North Korea’s leader Kim Jong-un to pretend to be a madman to keep the world off-balance.

The best chance for defeating this “deep state” is having, as president, Donald Trump, whom the military picked for the job and who will defeat and send the evil-doers to Guantanamo Bay.

Welcome to the alternative university and its master, “Q,” and its citizens, QAnon. Q dangles “bread crumbs” on the internet and “bakers” interpret them. QAnon believe a “storm” is coming, an apparent reference to a comment Trump made in an October 2017 photo op with military leaders and their spouses. “You guys know what this represents?” Trump asked reporters. “Maybe it’s the calm before the storm.”

The ﬁrst post or “drop” came in October 2017 on 4chan, was signed merely “Q” and predicted that Hillary Clinton would be arrested on Oct. 30, 2017, over her missing emails. That “drop” happened when a conspiracy theory was still fresh in the minds of some Americans, claiming that Clinton headed a child sex ring in the Comet Ping Pong pizzeria in Washington, D.C. On Sunday, Dec. 4, 2016, Edgar Madison Welch, described by LaFrance as “a deeply religious father of two,” drove 360 miles from Salisbury, N.C., to the restaurant, packing an AR-15 assault rifle, a Colt revolver, a shotgun and a box of shells.

Welch had watched conspiracy theories on social media with references to “pizza,” “pasta,” “girls” and “little boys” and felt duty-bound to save the children. On entering the pizzeria, he saw a normal restaurant scene. He tried to open a locked door with a butter knife before shooting out the lock, to discover it led to a small computer storage closet. Welch, who surrendered peacefully to police, told The New York Times, “The intel on this wasn’t 100 percent.” The Pizzagate conspiracy was born and forms part of QAnon lore.

It is not surprising that people would believe such drivel; Trump still has substantial support, despite so far making more than 20,000 false or misleading statements, according to The Washington Post.

Some Q posts are enigmatic, but others are explicit, such as this one reported by The New York Times in July: “Digital Soldiers: Take the Oath and Serve Your Country,” followed by “Take the oath. Mission forward. Q” and “Whoever controls the ofﬁce of the Presidency controls this great land.” Some other posts: “Nothing can stop what is coming;” “Trust the plan;” “The Great Awakening is Worldwide;” “They will stop at nothing to gain power;” “Where we go one, we go all,” or WWG1WGA – which became the QAnon pledge.

Trump has not explicitly endorsed QAnon but, on July 4 alone, he retweeted 14 QAnon posts, among 90 since the coronavirus pandemic started, Politico reported. The community has been returning the love, retweeting or replying to Trump “roughly 2,000 times” between February and June, The New York Times reported. Supporters have been displaying large QAnon signs, including at an August 2018 Trump rally in Tampa.

QAnon do not appear to be partisan, celebrating Trump not as a Republican but as America’s savior. Nor does it seem to be race-speciﬁc, though the community seems to be mostly white. Its most prominent African American member is probably Angela StantonKing, who registered to run against the late Georgia Rep. John Lewis in November. Trump pardoned her on Feb. 18 after she served time on a 2004 conviction related to a car-theft ring.

But there is a strong religious sentiment in QAnon, who are anticipating a “Great Awakening” creating a Christian revival. Q’s posts have included: “Finally, be strong in the Lord and in the strength of His might. Put on the full armor of God so that you will be able to stand ﬁrm against the schemes of the devil.”

According to The Atlantic’s LaFrance, “QAnon carries on a tradition of apocalyptic thinking that has spanned thousands of years.” In her lengthy article in June, she described QAnon as “a movement united in mass rejection of reason, objectivity and other Enlightenment values…The group harnesses paranoia to fervent hope and a deep sense of belonging. The way it breathes life into an ancient preoccupation with end-times is also radically new.”

In fact, LaFrance predicts, QAnon’s beliefs constitute not just conspiracy theories but probably “the birth of a new religion.”