From back of bus to back of the camel? Muslims say no 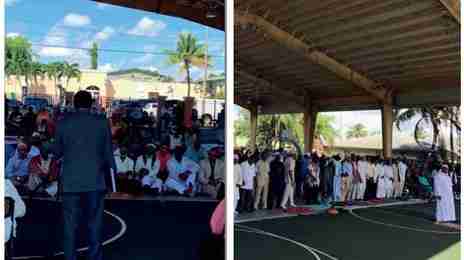 Commissioner Dale Holness, above left, presents a Broward County Proclamation in recognition of the 35th anniversary of the dedication of historic Masjid Al-Iman by Imam W.D. Mohammed on June 18, 1982. When Muslims from throughout South Florida gathered on July 25 in Franklin Park, across the street from the Fort Lauderdale mosque, to celebrate the end of the fasting month of Ramadan, the African-American Muslim founders who built the mosque found its doors were locked. PHOTOS COURTESY OF MOQTADIR NAIM

By BILAL SHABAZZ and VINCENT WARE

“Surely the believers are brothers, so make reconciliation between your brothers, and be conscious of Allah and ward off evil from within and without, that you may receive mercy.” – Qur’an 49:10 In late 1978 several Muslim families living in Broward County, who were attending prayers at Masjid Al-Ansar in Miami, saw a need to establish a satellite masjid, or mosque, in Fort Lauderdale. This mosque was to be an extension of Masjid Al-Ansar, which was affiliated with the leadership of the eminent Imam W. Deen Mohammed.

After weeks of discussion the community members moved forward with their intention of building a masjid from the ground up. They conducted many fundraising events and other activities to help offset costs for the land and construction of the masjid. Prior to occupying their new building, they met in storefronts, the local Masonic Hall, family residences and the community parks for worship.

Unfortunately, years later there were disagreements which led to division within the masjid. Many members stopped attending.

Several families relocated to other states. Eventually, the masjid built by indigenous African-American Muslims came under the administration of Muslim immigrants from various other countries.

We know from research conducted by scholars such as Imam Abdul-Hakim Quick and author Ivan Van Sertima that black African Muslims were on the shores of North America years before Columbus or any European settlers. Research done by Imam Quick indicates, with the most conservative estimates, that 35 percent to 45 percent of the people kidnapped and brought here as slaves from West Africa were Muslim. We know of many stories of Muslims who led slave revolts in the Americas and how some went back home to Africa.

The establishment of Masjid Al-Iman by black American Muslim descendants of slaves, and its hijacking by a unified, organized and well-funded group of immigrant Muslims, is a defeat in the sense that the original purpose of why the masjid was built in the middle of one of the most oppressed neighborhoods in central unincorporated Broward County was lost and rearranged to allow the continued neglect of this area.

It also is a trend that has been occurring around the country. Imam Luqman Ahmad’s book, “Double Edged Slavery, How African American Muslims have been Colonized,” examines how too many immigrant Muslims see America as a type of “Wild West” where anything goes, and came for nothing more than pure economic reasons and the desire to gain material possessions.

For them, Islam is a centuries old cultural phenomenon of rituals and sayings which very few of them understand. They cloak their version of Islam in this “culture” and pass it off as the Way of Life practiced by our Beloved Prophet Muhammad (pbuh). Many of them have lost the true essence of what it is to be Muslim, let alone how to effectively and practically apply Islam in America.

On July 31, 2015, approximately 50 members of Masjid Al-Iman in attendance for the meeting voted “No Confidence,” with 6 abstentions, for removal of the majority, immigrant-dominated Administrative Board. It was an overwhelming landslide victory for the black American Muslim descendants of slaves. This was ratified and witnessed by the former imam of the masjid, Rafik Mehdi (who is African American).

The victory, however, was short lived. What ensued was an onslaught of immigrant Muslims descending on Masjid Al-Iman on Aug. 8, 2015, coming from all over Miami-Dade and Broward counties, to “take back” Masjid AlIman from the Black American descendants of slaves. The board members who had been voted out re-inserted themselves, against the wishes of the members of the masjid. The leaders of this gang of rogue “Muslims” included a Moroccan, a Palestinian and a Sudanese. They went to the local bank and removed the names of the newly ratified board members, changed the locks on the masjid, and illegitimately coerced the cooperation of the Broward County Sheriff’s Office to provide the “muscle” to make sure they remain in control.

The newly elected ratified board members have filed a lawsuit regarding this situation that is scheduled to go before a Broward County judge sometime this month.

Meanwhile on June 25, 2017 the rightful administrators of Masjid Al-Iman celebrated the 35 Year Anniversary of the dedication of Masjid Nykhettah Mohammed (aka Masjid AlIman), at Franklin Park across the street from the masjid, in conjunction with the Eid-ul-Fitr celebration marking the end of the Muslim fasting month of Ramadan.

The entire community was invited. Broward County District 9 Commissioner Dale Holness was in attendance, along with a representative from the 20th Congressional District Office of Alcee Hastings. We fed more than 350 people and provided free toys to more than 175 kids. We had a kids bounce house, obstacle course and face paintings.

The highlight of the event was the reading by Commissioner Holness of Broward County’s Proclamation recognizing the establishment of Masjid Al-Iman by Black American Muslim descendants of slaves, and the honoring of the pioneers who are still with us today. Despite all this, those pioneers arrived to find the doors to the masjid they built locked, and we still have bigoted immigrant “Muslim” imams in the area who voice racial micro-aggressions and threats to the rightful administrators of Masjid Al-Iman.

Masjid Al-Iman is a testament to the will of the Black American Muslim descendants of slaves to be free and to control the implementation of Islam in our community. The struggle that we are engaged in at Masjid AlIman is the tip of the iceberg in the struggle for freedom and self-determination for our people in this country. We will never accept tyranny, nor oppression.

Vincent Ware has been a member of Masjid Al-Iman since 1999; Bilal Shabazz has been associated with the community since 2005.