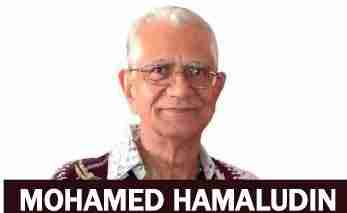 The weeping and gnashing of teeth that has become the hallmark of the so-called Republican Establishment over the almost certain nomination of billionaire real estate mogul Donald Trump smacks of more than a little bit of hypocrisy. It is hypocrisy itself.

These are the same folks who have been using their majorities in both the U.S. House of Representatives and the U.S. Senate in a campaign to delegitimize the presidency of Barack Obama, rather than set about the business of governing the country.

They vowed from the time Mr. Obama was first elected in 2008 that their sole mission would be to make it impossible for the first black President to govern and they have been true to their pledge.

Under their leadership, the Grand Old Party set about frustrating the multitude of initiatives which Mr. Obama sought to have implemented and where they failed they have devoted the full force of Congress to reverse his success. The Affordable Care Act is the most prominent example of this practice of obstructionism, with the House voting almost 50 times to repeal the law. And that has been happening regardless of the fact that the President substantially modified his original health care reform proposals to accommodate Republican concerns – and the fact that much of what came into law was based on GOP ideology, much to the chagrin of many in Mr. Obama’s own Democratic Party.

The nation has been subjected to a relentless drumbeat of GOP criticism of the Administration without any acknowledgement of its achievements, such as steering the nation out of the economic debacle that came to be known as the Great Recession, a legacy of the presidency of Mr. George W. Bush, a Republican.

The party’s total devotion to its anti- Obama agenda, reinforced by its friends in the media, has, for seven years, been sending out the message that America has collapsed, that every single problem facing Americans is attributable to “government.”

And it should not have been difficult to appreciate that the nation was being exploited by big corporations, the same economic sector that is a bulwark for the GOP. Hundreds of billions of dollars that, under the traditional national compact, should have been invested in the economy was salted away in offshore accounts. Factories that provided hundreds of thousands of jobs were shipped overseas, the owners providing jobs to foreigners as they exported employment overseas.

Rather than being a partner with the Administration in working out solutions to the very genuine problems which the recession created, many of which still linger today, the GOP leadership and its ideological warriors shifted the national dialogue to familiar grounds: cultural warfare.

The upshot has been that a large segment of the nation has seen little being done to address their plight and the resentment towards government, which has always been present, has been allowed to fester to the point where many Americans lost faith in the system.

To complicate matters further, these are times when racial and ethnic identity has formed the backdrop to much of what is happening on the campaign trail. The belittling of non-whites has shamelessly exploited a sense of unease among some Americans who are not yet ready to accept the inevitable “browning” of the nation and the inevitable numerical ascendancy of people who are not descended from Europeans.

It should be no surprise, then, to the GOP leadership, or the “establishment,” that a Donald Trump has emerged triumphant, thumbing his nose at those who have been controlling the party and saying, in essence, he does not need them, that they need him.

The few who are now infuriated that a television celebrity with no political experience, no political compass and no time for the niceties of traditional politics are many months too late with their lament. They tried in the last few months to stop a Trump nomination but their efforts should have started seven years ago. They laid the groundwork for the emergence of the candidate they now do not want.

The signposts were clear that a crisis existed and would come to a head at some point. It has happened – but not as the Republican leadership wanted.

As all of this is going down, there are some calls for African Americans to boycott the election entirely and stay home as a sign of protest against both the Republican and the Democratic parties for failing to finally grapple with the plight of blacks, especially in their communities. There is legitimate cause for complaint.

Neither Republican nor Democratic ad- ministrations have done much to turn off the prison pipeline, the tragedy of black males being warehoused in prisons, many of which provide full employment for people who do not look like them. Not many substantial initiatives have been implemented in decades to tackle head-on the underlying factors that cause the big levels of unemployment among African Americans, with demonstrable results.

But it is worth considering whether withholding one’s vote is a useful way to respond to the crisis. Not voting means that some candidate has one less vote to worry about and the outcome may be worse than expected.

And, besides, there will be more at stake in the November general election than the presidency. Many other races will be before voters and their outcomes will be very significant. In fact, it is possible that lack of voter turnout in past elections, both national and mid-term, could be part of the reason why so many state Legislatures and governorship’s have fallen into the hands of the GOP, with very adverse outcomes for African Americans, especially in voting legislation.

It is true also that African Americans have not been subjected to the crass disrespect that has been directed at other “minorities.” But it should not take political insults to motivate blacks into action. There is another, more persuasive, reason.

Many African Americans were killed, were injured, were set upon with dogs and water cannons so that their people would have the right to vote, to participate in choosing their government. The best way to honor their sacrifice – and to send a message to those who, even in 2016, are actively taking steps to disenfranchise blacks that they will not succeed – is to cast a ballot.

Mohamed Hamaludin spent four years as executive editor of South Florida Times and also served as an editor with The Miami Herald and as managing editor of The Miami Times. He worked for several years as a reporter and editor in his native Guyana.

Next post Pastor, funeral director, veterinarian and the small pew