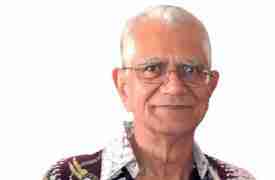 The reason? An astute administration’s keen eye for the law and the application of maximum administration delay – and fraud allegations.

It started on December 20, 2018, when the government of President David Granger, ruling on a 33-32 parliamentary majority since elections in 2015, lost a noconﬁdence vote after Member of Parliament Charrandas Persaud defected to the opposition. The constitution required that elections for a new Parliament and president be held within 90 days.

But Attorney General Basil Williams, in a unique case of tortured mathematics, went to court to argue that the constitution required an absolute majority of the 65 members of Parliament for a no-conﬁdence vote to be valid or 34 votes – although the government itself had a 33-32 edge.

Acting Chief Justice Roxane GeorgeWiltshire on January 31, 2019, rejected that argument and Williams promptly appealed. The Court of Appeal, on March 22, 2019, sided with him. The opposition appealed to the Caribbean Court of Appeal (CCJ), the ﬁnal court for countries of the Caribbean Community (CARICOM), of which Guyana is a member. On June 18, the CCJ ruled against the government.

By then, the time for new elections had passed but political leaders agreed to a postponement. Compiling an updated voters list and preparing for the elections took several months. It was not until October that a date was announced: March 2 – 15 months after the government collapsed and one year after the elections were due.

The Guyana Elections Commission (GECOM) was commended by a wide range of international observers for holding a fair election. But then came the counting of the ballots.

On March 5, three days after the elections, GECOM released results for nine of the 10 electoral regions showing the opposition leading by 51,439 votes. But when delayed results for Region 4 were ﬁnally announced, they showed the government with an overall majority of 7,000 and, again, a one-seat parliamentary majority. The opposition rejected those results.

As Clairmont Mingo, the elections ofﬁcial in charge of Region 4, was about to formally declare the results, opposition supporter Reeaz Holladar obtained an injunction against him from High Court Justice Navindra Singh. The judge barred GECOM from “declaring the total number of valid votes” and ordered Mingo and Chief Elections Ofﬁcer Keith Lowenﬁeld to “comply with and ensure compliance with the process set out” in law. On March 8, Chief Justice George-Wiltshire upheld the injunction and any plan to swear Granger in for a new term was put on hold.

The opposition’s call for a recount of Region 4 votes was unanimously endorsed by diplomats from the United States, the United Kingdom, Canada and the European Union, international bodies such as CARICOM and the Organization of American States and local civil society groups. All warned that the government would be “illegitimate” if it was declared the winner and Granger was sworn in without a “transparent” recount of Region 4 ballots.

An intense wrangling – which sparked some communal violence – ended when the government and the opposition agreed to invite CARICOM to send a team to observe a recount. It would involve not just Region 4 ballots but all the more than 400,000 cast, even though the votes of the other nine regions were not questioned. This was yet another delay. Government supporter Ulita Moore went to court claiming that GECOM, not politicians, was constitutionally empowered to decide on a recount. High Court Justice Franklyn Holder ruled in her favor but, on April 8, the Court of Appeal lifted the injunction.

On April 9, Chief Elections Ofﬁcer Lowenﬁeld offered a recount plan that would use three counting stations and last 156 days – still another delay, by another ﬁve months, to about September. The opposition wanted 20 working stations, saying, “The entire country’s results are normally tabulated in about two hours after the close of poll and the law provides 15 days for declaration of results, including recounts and further recounts, yet [Chief Elections Ofﬁcer] Keith Lowenﬁeld wants almost six months to count less that 500,000 ballots.”

GECOM Chairwoman Claudette Singh on April 17 settled for 10 recount stations but also left room for further delay, saying her plan will be “subject to the availability of the requisite equipment and technology to display the ballot.”

Even the coronavirus had a brief starring role. The head of the country’s coronavirus task force, Prime Minister Moses Nagamootoo, stated that the recount must adhere to quarantine rules and that the CARICOM observer team must be quarantined for 14 days on arrival – still another delay. However, President Granger decided that the CARICOM team will be pre-tested in their home countries and not quarantined in Guyana. Singh announced on Monday that the recount start date is awaiting word from CARICOM Secretary General Irwin La Rocque as to when the team will arrive.

And so it goes. It all begs the question: Why the fuss over the Region 4 ballots if an accurate counting of the votes would show the government won?

Mohamed Hamaludin is a Guyana-born journalist and a former executive editor of South Florida Times.

Next post Bureau of Prisons asked to provide demographic information