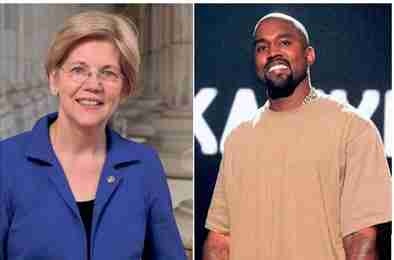 PHOTOS COURTESY OF ELIZABETHWARREN.COM AND BILLBOARD

If anyone had told me 13 years ago that I would be defending a rapper – Kanye West no less, I would have laughed and called them liars. In 2005, during a live telethon for victims of Hurricane Katrina and what some categorized as a bizarre monologue, Kanye West blurted out “George Bush doesn’t care about black people.”

Years later, he said he was just responding to “a victimized mentality.” He had been told by Democratic politicians, like former New Orleans Mayor Ray Nagin who failed to properly protect his citizens before, during and after Katrina, especially in the 9th Ward, causing severe devastation and loss of life and property, that Republican President George W. Bush was to blame.

But because Kanye espoused the Democratic Party line of blaming Bush for Katrina and adhering to the “Bush Derangement Syndrome (BDS),” he was hailed as a hero.

Kanye could do no wrong and his records made millions.

But then Kanye started becoming enamored with Donald Trump – the Republican POTUS who beat Hillary Clinton in 2016.

And to make matters worse, he began to wear Trump’s red MAGA hat (Make America Great Again). He came off the Democratic plantation and start hanging out with the man liberals call “a racist, a misogynist, a homophobe, and a xenophobe.”

“a traitor to his race,” and worse names you can’t repeat in polite company. Trump invited Kanye to the Oval Office and CNN, MSNBC and the MSM talked about how he conducted a “profanity-laced tirade” and beat his fists on the president’s desk.

Kanye said he was misdiagnosed with bipolar disorder, but his critics say he’s just downright mentally deranged. I heard one black radio announcer say he’s really become a “Kardashian,” meaning he’s lost his “Black Card” and taken on the whiteness of his wife Kim Kardashian.

When he berated Bush, he became a hero; now that he’s friends with Trump, he’s a villain – a fool.

You see, the Democrats created the Ku Klux Klan to keep colored folks in their place.

Now after the era of civil rights, they have taught Black Folks to keep other African Americans in their place. So, when you try to leave the plantation, you can expect your own people to beat you back in line. Kanye got out of line, so they expect his peers to whip him back in line.

Meanwhile, Elizabeth Warren will continue to be a hero in the eyes of liberals even though she lied about her heritage to get benefits reserved for Native American Indians. She pawned herself off as a member of the Cherokee Tribe to get into Harvard on a minority scholarship.

This white woman masqueraded as a Native American for as long as she needed and now after Trump kept calling her Pocahontas and she decided to run against him in 2020, she got a DNA test done. But what she thought would exonerate her, made her look more like a fool because even though her DNA does show some Indian blood, it shows she had a Native American in her family some 6 – 10 generations ago – less than most white Americans have in their blood.

She’s a fraud, but is still being heralded as a hero and therefore better than Donald Trump. The hypocrisy of the Left is astounding.

Elizabeth Warren is a liar and a fraud. I hope when 2020 elections come around, people remember that.

While I have very little time for rap, in fact, I don’t even consider it as “music,” I have respect now for Kanye West because he had the courage to come off the racist Democratic plantation as I did over 20 years ago. And he still wears his MAGA hat, even in the face of people like Beyoncé and Jay-Z (who felt honored to be invited to the White House by Obama). And that takes courage, not crazy.

Kanye may not have been invited to the White House by Obama, but he still got invited and that’s more than most rappers can say.

Next post Trump's boasts ring hollow in some black communities

Previous post How long before Sen. Paul's fears are realized?