Letter to the Editor: Another blockbuster revelation … 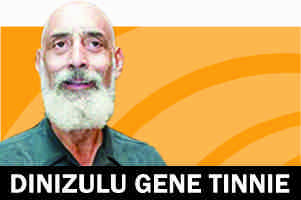 Our people have always been too realistic (having been “forced, obligated, challenged, and blessed to be truth knowers, Truth keepers, and Truth tellers”) to buy into such simplistic binaries as “Either you are a part of the solution or part of the problem,” knowing that life has too many nuances and shadings for such judgments to be made seriously, but then there are cases, like this one, that  come very close to that stark black-or-white situation.

The NAACP, not unlike the American Red Cross, which was recently exposed for being even worse in this regard than many of us thought, and other large, iconic nonprofits trying to survive in a world that is now run by private multinational corporations and a global banking cartel (rather than by national and local governments which they have effectively supplanted and now control, as the shapers of human destiny on the planet), find themselves all too often sucked into a game of simply struggling to maintain their “brand,” and the bureaucracy dependent upon it, essentially resorting to “the oldest profession” rather than focusing on the fulfillment of the missions for which they were created.

They have become, like too many of “our” elected officials whose primary day-to-day focus must be on fund raising rather than representing the constituent taxpayers and voters that put them in office, being more beholden to their corporate masters and the materially wealthiest few, and thus, “part of the problem.”

What you describe here in chilling detail (in the best of the journalistic tradition of “comforting the afflicted and afflicting the comfortable”) is the alarming, yet not surprising diagnosis of a patient who has ignored all the warning signs of the dis-ease until its symptoms are now full-blown and all but irreversible.  Your next column on this might just be the Eulogy for an organization whose very birth was questionable, but at one point rose to heroic status, even claiming its share of truly inspired and inspiring martyrs along that stony road we trod through time.

It is quite true, paradoxically, that in a just and honest world, much the goal of this once-venerable organization, its greatest success, would be its own demise, as such a group would no longer be needed for the specific advancement of Colored people.  But we are not in any such world, and the organization’s prospective demise, should it come about, would, sadly, result from the exact opposite causes, all but begging the question of what real purpose those heroic sacrifices of the past have actually served.

These are not times for resting comfortably, on past laurels or anywhere else.  The global privatized corporate-and-finance juggernaut has succeeded in bringing governments (once the putative voice and conscience of the people) to heel, increasingly gutting  such people’s demands as government regulations and paying their fair share of the tax burden, not to mention fundamental accountability.  Given the history of this country, and of the wealthiest few, do any of us who are awake seriously doubt that these people are not about the business of effectively reinstating slavery?

That may sound melodramatic and (non-pathologically) paranoid, but let there be no doubt as to the veracity of Sir Josiah Stamp’s pronouncement over a century ago that “None are more hopelessly enslaved than those who believe themselves to be free.”  The Civil War was not really about ending slavery but altering it to the more efficient and profitable modes of wage-slavery, prisons, sharecropping, migrant labor, global sweat shops, etc.  The first of these tactics has proven to be the most effective, as we see daily:

By paying minimal wages to the labor force (instead of unpaid forced laborers), the new order of slave owners take no responsibility for the welfare of their “property” in sickness or in health, or at ages too young or too old to work: the new wage-slave is on his or her own.  We hardly have to elaborate on the realities of this in our own time — with real wages stagnating as prices rise (whence the recent mortgage crisis); with the student-loan industry and corporate-owned “universities” as the new sharks, placing graduating students in much the same position as illegal immigrants who must pay a significant portion of what they earn to the thugs who got them into the country; with so many workers, like those in the fast-food industry not even making a living wage while bought politicians rail against a raised minimum wage, etc., etc.

The new slavery is much less racialized (but still enough for the glaring disparity in the prison population, and enough to play on the ignorance of those “white” people who will accept any degree of oppression as long as they think they are doing better than those of darker complexion), much more generalized, and definitely more pernicious and entrenched.

Where is the NAACP in confronting this new reality and fighting for the rights of our race — the HUMAN race — against the cancerous greed of the most corrupted and morally bankrupt few?  In this new reality, we are ALL “Colored” people, “colored” in the eyes of the manipulative ruling elite by enforced impoverishment and disempowerment in varying degrees.  What ever happened to the spine, the vision, and the leadership that that organization once so nobly brought to the struggle for social justice and equality?  Have those qualities been simply transmogrified into a romanticized décor in which a generation of indolent bureaucrats can live comfortable lives, play-acting at activism in exchange for a warm sleeping place on the floor at the foot of Massa’s bed in the big house?

That is a gross stereotype and exaggeration, of course, but the scenario you describe suggests that we are dangerously close to just such a situation, if not already beginning to drown in it.  Certainly it is the direction that the greedy would prefer to see us, and the nation’s oldest and largest civil rights organization take.

Whatever the case, we know that, to paraphrase the POTUS, change has to come TO such organizations, not FROM them, and if we citizens on the ground want to see change we can believe in, we will have to, as Ghandi said, “Be the Change.”