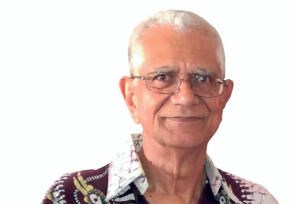 Immigration policy is usually regarded as a political matter but a much more sinister motive has existed for centuries due to studies by scientists and others who, starting in the 1700s, have strived mightily to prove that foreigners are less than human and, if allowed to immigrate, would pollute the nation.

Journalist and author Sonia Shah, in her book “The Next Great Migration,” traced the work of scientists who pursued such research, including French naturalist George Luis Leclerc Comte de Buffon: “As people and species migrated from the Garden of Eden, Buffoon theorized, new diets and climates ‘degenerated’ them. Because the Garden of Eden had been located somewhere near Europe, Europeans retained much of their original state of perfection.” As for Africans, Asians and Latinos, their “migrations into too-hot and too-cold climates had turned them into the misshapen, morally questionable creatures described by 18th century voyagers.”

The debate about assumed inferiority, based mostly on studies of animals and plants, took place in Europe but inevitably reached the United States, where European Americans had already decided that most other peoples were not their equal. At the Second International Conference of Eugenics held at the American Museum of Natural History in New York City in September 1921, “the most critical scientiﬁc question … concerned the fundamental biological problem posed by immigration – the biology of race-mixing,” Shah said.

The conclusions were sent to Republican Rep. Albert Johnson of Washington state, then chairman of the House Committee on Immigration and Naturalization. During consideration of the ensuing immigration bill, some Congress members talked about keeping the blood of America “pure,” that “We are a different race” and that “immigrants will vitiate our population” – spoil it. President Calvin Coolidge signed the Immigration Act of 1924, also known as the National Origins Act, designed to drastically curtail immigration. “America must be kept American,” he proclaimed. As with his “stolen election” claim, President Donald Trump was not original on this either.

But Trump blended in nicely with his insistence that most migrants were “criminals” and the U.S. Border Patrol devised tortuous ways to produce the evidence, including a 2015 policy which Shah described: “Instead of counting the number of agents assaulted, as most other experts did and as they had done in the past, ofﬁcials started counting the number of agents assaulted, multiplied by the numbers of attackers, multiplied by the number of objects the attackers used in the assault. If a few migrants threw a couple of rocks or sticks at some Border Patrol agents, each rock and each stick thrown by each migrant counted as a separate incident.” So, after six people pelted a group of seven Border Patrol agents on Feb.14, 2017, ofﬁcials “logged that single incident as 126 separate assaults.”

The debate on population control has stubbornly persisted, including in the book “The Population Bomb” by noted scientist Paul Ehrlich, who subsequently recanted his assertion that immigration equals doom – but not before his Zero Population Growth movement led to horriﬁc policies, notably in India.

President Joe Biden embraces a more humane approach acknowledging the immigration roots of the nation, that “Immigration is essential to who we are as a nation, our core values, and our aspirations for our future” and that foreign-born workers contribute $2 trillion annually to the economy.

In pursuing his policy, Biden must also focus on a category of migrants who, except for the well-publicized crackdown on Haitians, have received little notice. Immigrants of African descent, while less than 5.4 percent of undocumented immigrants, faced 10.6 percent of all deportation proceedings between 2003 and 2015, independent journalist Jack Herrera noted in a recent Nation article, citing data from the Black Alliance for Just Immigration (BAJI). President Barack Obama was partly to blame.

“Decades of overcriminalization of Black communities had resulted in higher rates of conviction for Black people, which, when paired with Obama’s emphasis on people with criminal records, led in turn to higher rates of deportation for Black migrants,” Herrera said. “By 2015, more than one out of every ﬁve people facing deportation due to a criminal conviction was Black, despite making up just 7.2 percent of the total noncitizen population, documented or not.”

Jamaicans topped the list of rejected asylum seekers in the early 2000s, at 92 percent, Herrera reported. The American Bar Association noted that Somalis had the highest rejection rate in 2017. Also, asylum-seekers can be required to post a bond to avoid being detained. Herrera found that the amounts tend to be higher for people from the Caribbean and Africa, sometimes as much as $50,000, which most cannot pay. A Rwandan spent 10 years in a detention center – the longest ever – and a Kenyan nine years, though the average is 55 days, Herrera reported. Also, asylum-seekers of African descent comprise four percent of all detainees but were 24 percent of all who were placed in solitary conﬁnement from 2012 to 2017.

Few Americans may be familiar with the studies which led some scientists to warn against “race mixing” through immigration. But those studies, long since debunked, were used to justify genocide against Indigenous Peoples, enslavement of Africans and a racist criminal justice system to control them and centuries of brutal colonial conquest, occupation and destabilization-a key driver of immigration.

Knowledge of what caused racist hatred to be embedded in the psyche of some people could help to eventually bring the curtain down on this tragic chapter of American and human history generally.

Next post It’s your health: Fight covid, but don’t sleep on HIV/AIDS