New leadership could lead Evangelical Christians out of the political wilderness 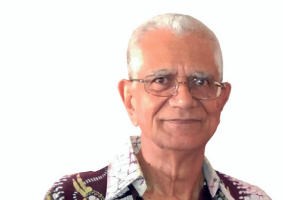 MSNBC star Joe Scarborough said on his “Morning Joe” program on Aug. 11, 2017, that the rival Fox network “seems now to be a wholly owned subsidiary of Trump Inc.”

Columnist Fintan O’Toole wrote in the Irish Times on Feb. 8, 2020, that the Republican Party was now a wholly owned subsidiary of Trump Inc.

And then there is the Southern Baptist Convention (SBC).

Television, rightwing politics and the Evangelical Church have provided the prop that keeps Donald Trump politically aloft while he exploits the trust of millions of Americans.

Fox is still going strong, with some on-air personalities getting between $1 million and $30 million to peddle Trump’s lies and otherwise keep the faithful deluded. The Republican Party has become even more beholden to Trump. Its leaders rejected credible evidence presented in two impeachment trials accusing him of trying to strong-arm the Ukraine government and inciting an insurrection. They refuse to join a commission to probe the Jan. 6 attempted coup.

But change may be coming to the SBC, whose 14 million members comprise the nation’s largest Protestant organization and who voted 84 percent for Trump in 2016. The SBC could be finally making a decisive break from its racist past, due largely to a handful of leaders who have been bucking that history, as well as younger Christians and African American pastors.

In the national outrage over a policeman’s murder of George Floyd a year ago, then SBC president J.D. Greear not only acknowledged the term “Black Lives Matter” but also refused to use the Broadus gavel and called for its removal. Some 80 percent of SBC member-churches are in the South but Greear said last September that “Baptists have “a shared evangelistic mission, not Southern culture” and that should shape their identity from now on, Bailey reported.

Greear supported a name change for the SBC to Great Commission Baptists. “Our Lord Jesus was not a white Southerner but a brown-skinned Middle Eastern refugee,” Greear told Bailey. “Every week we gather to worship a savior who died for the whole world, not part of it. What we call ourselves should make that clear.”

He made it a point to state that African American pastors lead 20 percent of the SBC’s 50,000 memberchurches and started 63 percent of the new congregations. Also, the SBC apologized in 1995 for its “complicity in slavery and racism,” Bailey said.

However, any racial rapprochement was set back after six European American pastors on Nov. 30 joined the bandwagon denouncing critical race theory (CRT) which urges a full examination of the country’s history. Several African American churches left the SBC in protest.

Still, on June 15, 16,000 SBC delegates meeting in Nashville narrowly elected moderate Alabama pastor Ed Litton to succeed Greear. Litton quickly called for “healing,” The New York Times’ Ruth Graham reported. “We are a family,” he said. “At times it seems we’re incredibly dysfunctional, but we love each other … My goal is to build bridges and not walls.”

Litton will most likely build on Greear’s initiatives but it will be difficult, especially with Trump still wielding considerable influence over his membership. One early step should be debunking the sacrilegious imbuing of Trump with divine authority and likening him to Biblical figures. This, perhaps more than anything else, has kept Evangelicals stuck to the former president, narcissism and amorality notwithstanding.

Sanitizing of Trump began under the auspices of the Council for National Policy (CNP) and culminated in key support from several major religious leaders, Ann Nelson wrote in her book “Shadow Network.” At a meeting in New York, Ben Carson asked the faithful to view Trump “in a new light, however unflattering … This is like a chess match and God is the great grand master. Sometimes he uses a pawn.” Franklin Graham said “the God of the Old Testament worked through lots of sinners: Abraham lies, Moses disobeyed God. David committed adultery and had a man killed.”

So, by the time The Guardian’s James S. Gordon was traveling in a Uber driven by an unidentified African American woman in March 2017, she was telling him that “Donald Trump is anointed by God,” adding, “But he doesn’t have to be a Christian to be part of God’s plan. Our minister says he’s come to tear down the corrupt order just as Nebuchadnezzar did… There are also many who believe that Mr. Trump is not Nebuchadnezzar but a Cyrus.”

Litton could tackle the cognitive dissonance that afflicts Americans such as that Uber driver – the condition which psychologist Leon Festinger diagnosed in the 1950s as occurring “when conflict emerges between what people want to believe and the reality that threatens those beliefs,” as The Post’s Kathleen D. Vohs put it.

“The human mind does not like such inconsistencies,” Vohs reported. “They set off alarms that spur the mind to alter some beliefs to make the perceived reality fit with one’s preferred views.” In effect, people tend to hold on to beliefs, however unfounded, because giving them up will render their lives meaningless. The Bible provides an antidote in Matthew 6:24: “No one can serve two masters; for either he will hate the one and love the other, or else he will be loyal to the one and despise the other. You cannot serve God and mammon.”