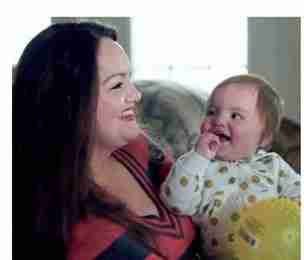 Victoria Williams shares a laugh with her daughter

NAMPA, Idaho (AP)— If you had met Victoria Williams a few years ago, you would not recognize her as the woman she is today. Addicted to meth, she was arrested on possession charges in March 2016. It was a few weeks into her stay in Elmore County Jail while waiting for her sentence when she found out the news that would change her life.

Williams said her first response was fear, but the baby’s father, Jose Hernandez – who had been arrested with Williams – had a different reaction at the news.

“He said, ‘We have a new beginning,”’ Williams said. “And I guess that mindset has helped me to realize that this wasn’t something bad happening, but that God saved us from something worse.”

It was indeed a new beginning for Williams. Today, she is back as a contributing member of society with a job, an apartment and a vehicle – all of it due to her drive to provide a good life for her baby, her faith in God, and a little help from some Nampa shelters and an act of charity from a local business.

Williams was sentenced to six months in prison in October 2016, and on Nov. 29, 2016, she gave birth to a girl – also named Victoria at the request of the father. She said she was supposed to have two days with the infant during her stay at the hospital, but it was extended to five days.

“I got pre-eclampsia,” she said with a laugh. “So I was in the hospital for like five days … I just wanted to stay sick and stay with her.”

Her baby was put into state custody after that five-day period, and Williams was sent back to prison to serve the rest of her sentence. Within 24 hours of her release in April 2017, through the help of Boise Rescue Mission, she said her baby was back in her care, but both were without a place to live.

Williams found a temporary home at the Valley Women and Children’s Shelter in Nampa. They provided her and her child with food, resources and a place to sleep at night. She got a job at a Specialty Fulfillment Center LLC, which, though the wages were low, was the first step in the savings she was slowly building to buy a car.

For the next few months, her schedule was grueling. Waking up as early as 4 a.m. some days, Williams would walk about three miles to work every morning, pushing her baby in a stroller to her daycare center, which was at a midpoint in her walk.

After work, she would race back to the daycare center to make sure she picked up the baby Victoria before 6 p.m., because she could not afford to pay an extra $10 for every five minutes she was late picking her child up.

“But that never happened, thank God,” Williams said. “Because I know how to run with a big, old, heavy backpack.”

In the intense summer heat, Williams would lay a wet rag on her baby’s head and move the stroller as fast as she could to create a breeze so her child would not overheat. Once or twice, she said she was offered a ride by some people she knew before she was arrested. While that would have been an easy and probably harmless solution, she denied their offers – not because she was worried she would start using again, but because she didn’t even want to entertain the risk.

Tena Martinez, who works at the shelter, said Williams was allowed to stay longer than usual because she followed the rules and the staff could see how hard she was working.

“She never gave up. Not once,” Martinez Once she had saved up about $300, Williams bought a 1993 Chrysler Concord. She said it couldn’t go over 35 mph, but it was good enough.

“It didn’t really look like a hooptie, but it was,” Williams said.

The car had problems, but Williams said she thought they would all be solved by a free oil change that Christian Brothers Automotive was offering to single mothers. Instead, the mechanics told her they didn’t know how her car was even running.

But she wouldn’t have to worry for long. A few days later, Christian Brothers Automotive gave her a car – a 1999 Honda Accord – and even provided Williams with a free shuttle from her work to go pick it up. The vehicle has been reliable for Williams through the winter, she said, and has even allowed her and her baby to visit Hernandez, her fiance, in St. Anthony. He is serving a sentence at St.

Anthony Work Camp through 2019 for charges of illegal possession of a firearm.

Williams has taken a permanent job at Target, which she said pays better than her previous job at the fulfillment center. She has partial custody of two of her other children, Esperanza Arellano, 8, and Cristian Arellano, 10, and is working to gain custody of two of her older children. She plans to marry Hernandez before he is released, as soon as the Idaho Department of Correction approves it.

Sometimes, Williams said she worries that she is not going to be able to pay her bills, but she refuses to quit working. Through her journey, she said her biggest motivator, along with her children, was her faith in God.

“When people compliment me, I got to give the glory to God,” Williams said.