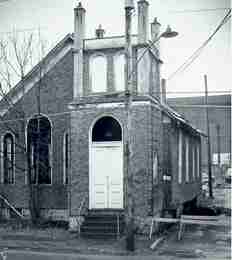 “I had to do something,” he said. “I wanted the church to be remembered.”

A sapling willow tree and a plaque in Waynesburg’s College Park near the pond and fountain now memorialize a structure once integral to black life in Waynesburg.

“This weeping willow tree in honor of Bethel A.M.E. Church by Amanda and Bill Davison,” the marker reads.

The Franklin Township resident wrote a letter last year to Waynesburg council requesting an honorific for the church, which was demolished in 1984, just a year before its 100th anniversary. The foundation was beginning to collapse, and the building sat unused for several years before it was torn down.

But though the physical building is gone, the memories and legacy live on.

“It was an important part of the community, and I just don’t want it to be forgotten,” Davison said. “It’s to remember the church and remember the black community.”

The plaque is from Davison and his 12-year-old daughter, Amanda. Davison is passionate about his lineage and genealogy. When it comes to local black history, he’s somewhat of an expert.

Davison said he put a lot of thought into which tree would be best, and the weeping willow had a lot of personal significance for him. He can’t wait for it to grow and for his daughter to see it.

“Everyone played up here,” he said, motioning to the area of the college park and neighboring Franklin Street. “Because of that weeping willow, I thought this might be a good choice.”

The AME church was constructed on the corner of West Franklin Street and an alley known as Fruit Street in 1885, rebuilt after arson destroyed Waynesburg’s first AME church on North Morris Street, Davison previously told the Observer-Reporter. Both properties now belong to Waynesburg University, he said, and Davison would love to get markers at each site.

A drain in the AME church basement caused the damage to the foundation, and when the wall gave way, there wasn’t any one left to make repairs. Most everyone had moved out looking for jobs elsewhere, and it wasn’t a gathering space anymore, Davison said.

Passing on his legacy to his daughter is extremely important. And not just their history, but the history of black people in Greene County.

“I tell her her story,” he said. “It’s important that she knows everything I know.”

He’s traced his family back as far as 1779; his great-great-great-grandfather was the son of a slave named Jane, purchased by Thomas Hughes of Greene County. Davison didn’t know much about his ancestry until the late 1990s. He suspected he descended from slaves. Things had been kept secret, with lots of unknowns and family stories.

“I didn’t ask, and nobody was telling me,” he said. “I just want to find out everything.”

Black life in Greene County Now, Davison works to lend credence to those stories, because there is a kernel of truth behind each. It can be difficult to find documents and news stories that validate what’s been whispered among relatives for generations, especially the stories of people who were once considered property rather than citizens.

Davison said there were slaves in Greene County, but they were not numerous.

“But one is somebody’s heritage. To us, it’s not the numbers. It’s the history.”

There are some former slaves for whom he cannot find records, especially women. Some had children who were sold South. There’s evidence of slavery and early African-American life all across Greene County, and he finds that information through obituaries, stories, funeral records and more.

He detailed the evidence in his book, “Early African American Life in Waynesburg, Greene County, Pennsylvania,” co-written with Marlene Bransom. A copy is available at Eva K. Bowlby Library in Waynesburg.

“The main cemetery for African American burials in Greene County is located in Waynesburg on North Morris Street and is called Green Mount Cemetery,” reads a section on African-American burial grounds throughout the county. “Although Green Mount Cemetery has been burying all races since the late 1800s, it is racially divided with the African American graves going in a direction opposite than that of the white graves.”

“Colored” cemeteries or sections in cemeteries for black people dot the countryside. There’s evidence of a schoolhouse that served black children and information about freed slaves traveling through Southwestern Pennsylvania.

There are stories of the Underground Railroad running through Greene County, but Davison said it’s hard to find concrete evidence of that.

“It was active here,” he said with a wise nod. “This was freedom.”

He said he’s heard Waynesburg University had been part of the route, but can’t find solid proof. Lots of people may have hidden compartments in old homes, but it’s hard to verify if those were used to hide slaves or to hide booze during Prohibition. He comes across lots of those dead ends.

“We listen to them, you read them and you file them away,” Davison said.

To anyone else wanting to dive deep into their heritage, Davison suggests becoming acquainted with local resources, like the courthouse, historical societies and libraries. He’s spent plenty of time looking at microfilm at Cornerstone Genealogy Society. The internet, too, can provide a wealth of knowledge, and chances are good there’s someone else out there looking for information about the same person.

“It’s a little hard for African-Americans because we had no surnames,” Davison explains. “That’s part of the mystery.”

DNA also has been instrumental in debunking myths and stories. Davison had been told he had American Indian ancestry, but a DNA test proved that to be false.

The research never stops, though. “I’ve got several more years to do it, and then it’ll be Amanda’s turn,” he said. “These are things that anyone who lives here has a right to know.”