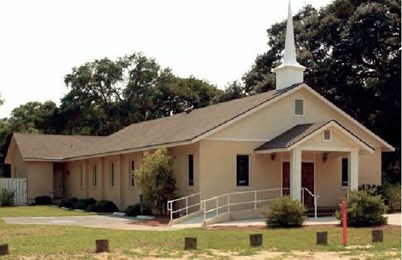 On any given Sunday, at least five planes fly in and out of the Hilton Head Island Airport – which is effectively in the church’s backyard.

The building has crumbling corners and cracks that Hamilton attributes to sounds of jets that rattle the windows.

St. James Church is the oldest continuously-operating cultural institution remaining within Mitchelville, the north-end village established for freed slaves in 1886, according to church leaders.

Since October, the Hilton Head Island Airport has announced an additional 53 flights per week during tourist season on national air carriers such as American Airlines, Delta Air Lines and United Airlines.

The first of those flights leaves the island on Sunday – a few hours after the end of Hamilton’s service.

The new announcements mean 106 new landings and takeoffs at the north-end airport each week.

In 2018, the airport finished a 700-foot addition to the runway, and it’s currently in the planning process for a terminal and parking lot expansion project.

Making the runway longer allowed larger planes to land there – but the massive growth at the airport comes with dire consequences.

The Town of Hilton Head Island is in talks with St. James to relocate the congregation along with the Old Cherry Hill School, which is across the street.

“The move is going to happen, we’ve got that established,” Hamilton said. “We finally decided after fighting this thing for so many years to just consent to this in late 2018.”

The Hilton Head Town Council has voted unanimously to enter into negotiations with representatives from the church about buying St. James Church and relocating the Old Cherry Hill School “from the object-free zone of the Hilton Head Island Airport.”

“We’re absolutely moving St. James because of the airport,” Mayor John McCann told The Island Packet in March. “It’s a dramatic move for them, but it’s for (the)

safety of the church.” Beaufort County airports director Jo Rembold said the congregation and the school must be relocated because the buildings currently sit in the “runway pr tection zone” for the newly-expanded landing strip at the airport.

The Federal Aviation Administration ad vises that zone be owned by the airpor Rembold said, because “statistically, most aircraft incidents happen after takeoff. It’

But Hamilton, who has been preaching at the church for 19 years, said the airpor should have taken that into account when expanding.

“The community seeks (the church) as their lighthouse,” Hamilton said. “How do you put a price on the culture and the heritage that was there?”

The town’s plan is to purchase the school and St. James, relocate the schoolhouse building in its original form, and build the new church, according to town materials and Hamilton.

He said the schoolhouse – which is listed on the National Registry of Historic Places – will likely be somewhere near the Barker Field baseball diamonds. The new St. James Church will be built right next to it.

Ahmad Ward, the executive director of the Mitchelville Preservation Project, said although the building and the congregation will not be moved to the Historic Mitchelville Freedom Park, the members have strong feelings about staying close to the foundations of the 133-year-old church.

“They don’t want to go to another section of the island,” Ward said. “It’s got to be somewhere close to what their historic imprint has been.”

Hamilton said the town will be responsible for the costs of relocating the school and building the new church. He acknowledges the trust that requires.

After the negotiations, the town will have control over what happens to the empty St. James Church building. The congregation hopes it will be maintained as a historical site and museum.

But it could just as easily be knocked down, Hamilton said.

He said the spirit of the church is in the nearly 200-person congregation, and it will follow them to the new building.

But he still sees the church’s fate as a direct consequence of the island’s growth.

“The church was there first. You’re destroying a culture and a heritage of the people that runs deep,” he said. “It’s a history of the people caught in the jaws of progress.”

The Old Cherry Hill School is listed on the National Register of Historic Places, which is “the official list of the nation’s historic places worthy of preservation,” according to the National Park Service website.

However, the designation does not provide protection from demolition or relocation.

“The nation’s list is of places worthy of preservation, it doesn’t say ‘this is a list of properties that must be preserved.’ It’s just not set up to mandate or require preservation,” said Brad Sauls, the supervisor of registration and local government programs for the South Carolina department of archives and history.

When historic buildings are moved, they typically lose their designation on the list, but Sauls said the town and representatives from the church have been in talks with the registry to relocate it true to form and keep the registry.

“It’s going a relatively short distance, and being put on a comparable site,” Sauls said. “You have a much better chance of maintaining registry listing if you can maintain the historical setting, character and fabric (of the property).”

Although they’ll fight to keep the designation, Hamilton sees the conflict – both past and future – as a reckoning between old and new.

And between the powerful and the disenfranchised.

The recent extension project was only the first step in a two-part plan, which would have ended with a 5,400-foot runway. Beaufort County Council members put the pause that second part, Rembold said.

“County council directed that phase one be completed,” Rembold said. “Anything else is speculation.”

But the 5,400-foot runway still exists in the airport’s master plan, which means it’s likely to be taken up again in the near future.

“Our goal is to provide the most convenient travel possible,” Rembold said in January at a news conference. “We can bring residents, visitors and business travelers directly to Hilton Head Island.”

Asked how many members of the St. James congregation use the airport for business or leisure travel, Hamilton didn’t hesi.

tate. “None,” he said definitively. “Not a single one is going to fly out of that airport.”