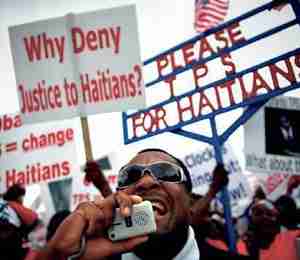 Crowds march to request the extension of Temporary Protected Status (TPS) for Haitians.

The Church of the Brethren Office of Public Witness has signed onto a letter to the US administration from the Institute for Justice and Democracy in Haiti. The letter responds to signals from the administration that a decision may be made not to extend Temporary Protected Status (TPS) for nearly 50,000 Haitians living in the United States.

The special TPS status has been extended in 18-month increments since this group of Haitians took refuge in the United States following the earthquake that devastated their nation in 2010. If TPS were not to be extended for another 18 months beyond the current end date of July 22, Haitians with TPS status will face deportation.

The letter asked for TPS status to be extended, saying: “We concur with USCIS’s extremely detailed, 8-page single-spaced December 2016 review and assessment that the conditions warranting TPS for this group persist.

We respectfully disagree with its recent unfounded contrary recommendation and urge you to extend TPS for 18 months for those currently enjoying this status, i.e. who applied as having been present in the United States on or before January 12, 2010 (updated to January 12, 2011 to cover some post-earthquake parolees) …”

“TPS … is appropriate today because it remains unsafe to deport due to conditions including incomplete earthquake recovery; the still-unchecked cholera epidemic, the world’s worst; and Hurricane Matthew’s vast destruction in October, which has caused a severe food insecurity crisis,” the letter continued, in part.

Nathan Hosler, director of the Office of Public Witness, reported that he signed onto the letter in support of Haitian Brethren, after receiving information about the concern this is causing among Haitian congregations.

Separately, Global Food Initiative manager Jeff Boshart, who has spent time working in Haiti in the past and who served there with Brethren Disaster Ministries following the earthquake, reported similar responses from Haitian Brethren.

Ludovic St. Fleur of the Eglise des Freres Haitiens congregation in Miami, is one of the Brethren leaders expressing concern, noting that people in his congregation will be negatively affected.

“His members have written to their representatives and senators and are not sure what else they can do,” Boshart said of St. Fleur’s concerns. “They greatly appreciate the prayers and support of the wider church.”