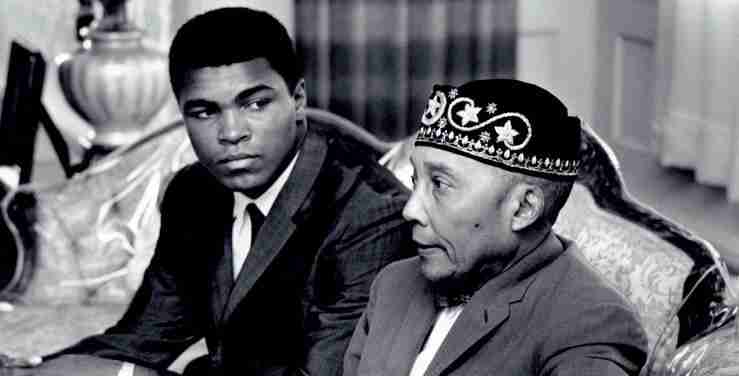 "An Academic Examination of the Honorable Elijah Muhammad’s Teachings" is being presented beginning Sept. 6 as a free virtual conference, open to the public.

The five-part online event will be held each Tuesday in September from 6 – 8 p.m. on the Zoom video platform. It also will be available for viewing via livestream on Facebook.

One can register at eventbrite.com for one or all five dates in the conference to receive the Zoom link via email.

The conference is subtitled, “And the Impact on African American Culture, Education, Commerce and Al-Islam in America.”

It is being hosted by Study Al-Islam in partnership with the International African American Museum, and sponsored by AM360 and The Muslim Journal.

The sessions notably include students of W.D. Mohammed, the Hon. Elijah Muhammad’s son, who like him were dedicated members of the original Nation of Islam (NOI).

Said Imam Michael Saahir, author of “The Man Behind the Men”: “Among his followers, whom much has been written about their contributions, are Malcolm X, Muhammad Ali, Minister Louis Farrakhan and Imam W. Deen Mohammed (ra). However little acknowledgement, credit or recognition has been given to the "man behind the men," the Hon. Elijah Muhammad.”

“First, my people must be taught the knowledge of self. Then and only then will they be able to understand others and that which surrounds them.

Topic – Social Reform: In the decades after slavery, Black people in America generally were consumed by a deep self-hatred, lack of selfknowledge, and stereotyped as lazy, ignorant, inferior and inhuman which was reflected negatively in the way they behaved towards themselves, their families, and others.

Question: What was in the Hon. Elijah Muhammad’s teachings of social reform, and leadership style that attracted thousands of disenfranchised and criminalized Black-people, enabling them to become productive and responsible citizens, in the same society that oppressed them? How did The Hon. Elijah Muhammad represent Africa and other parts of the black world in his speeches and publications? Besides “Muhammad Speaks,” what other publications provided information on Africa and other parts of the world.

Ownership and Operations The Solution to Economic Equity?

“I was born in the South. I married and went to Detroit with my two children in 1923. I know the South and the Southern white people. They are actually a people who envy any success that comes to the so-called Negro in any way. If you own a little more than the white man there, why he’s against you; he may even kill you. He may bomb you or destroy your property. He just doesn’t like the fact of your having anything. Whether in court, in justice or in any way. This is naturally in their blood. They want the black man to have nothing.” – The Hon. Elijah Muhammad

Topic – Economics: Under the leadership of Elijah Muhammad, business was a priority. National and

international business trade was achieved, and members urged to “do for self.”

Question: America’s economic developments are big corporate franchises, as well as the increasing phenomena of on-line business, is a vision of cooperative economics still realistic for our people within the 21st century? Did Elijah Muhammad’s teachings encourage his followers to connect with the Africa continent, did his ideas ever evolve over time? What aspects of his teachings might be instructive for those who desire to build bridges to Africans and diasporic people in other locations today?

Opening Statement: With only a third-grade education, how did the Honorable Elijah Muhammad manage to acquire and control the empire he built? – Nadar Ali

Three: Is Education a Solution to Inequality?

“Acquire knowledge. It enables its possessor to distinguish right from wrong; it lights the way to Heaven; it is our friend in the desert, our society in solitude, our companion when friendless; it guides us to happiness; it sustains us in misery; it is an ornament among our friends and an armor against enemies." – The Hon. Elijah Muhammad

Topic – Education: Sister Clara Muhammad, wife of the Hon. Elijah Muhammad, opened independent Black schools in almost every major city to “educate our own.” The naming of the school, "Muhammad University of Islam," spoke to the high standard of academic achievement expected of all students from kindergarten through high school.

Question: Is it necessary to educate our own children? If so, why, If not, why not? Was the economic plan envisioned under the Hon. Elijah Muhammad’s leadership designed to have an impact on the NOI’s educational vision for a selfsustainable independent school system?

Opening Statement: Describe the curriculum and a typical school day at the University of Islam? – Sister Jean Rahman

Session Four: Does the End Result

“You are not American citizens or members of the white man’s world. The only American citizens are the white people who are originally from Europe. So why fight a losing battle by trying to be recognized as something you are not and never will be. I am not trying to disillusion you but merely telling you the truth.” – The Hon. Elijah Muhammad

Topic – Methodology: Some critics of the Nation of Islam (NOI) viewed it as a racist cult ruled by a dictatorial leadership. The separatist nature of the movement kept members isolated from the wider society, and thus the organization was highly scrutinized and criticized by the government, some Black leaders, and segments of the general population. Yet the effectiveness of The Hon. Elijah Muhammad’s leadership and teachings contributed to the NOI’s great accomplishments.

Question: The Hon. Elijah Muhammad’s teachings of social reform, do for self, and separation was designed to protect and isolate its members from the systematic racist laws that subjugated African Americans and kept them imprisoned physically, oppressed mentally and enslaved spiritually. We know that many of these laws still exist today, for the same reasons and are producing the same/similar outcomes.

Do you believe that these teachings are relevant in the 21st century in whole, in part, or not at all?

Session Five: Did the Hon. Elijah Muhammad Prepare his followers to Accept the Leadership of Imam W. Deen Mohammed?

“This is the time that the Bible and Holy Qur-an refer to as the “resurrection of the dead” (mentally dead or ignorant people) whom God wishes to make wise and set over the nations by His guidance and His infinite wisdom.” – The Hon. Elijah Muhammad, “Message to the Blackman in America”

Topic – Religion: In 1975, Imam W. Deen Mohammed (son of the late Hon. Elijah Muhammad) was unanimously accepted as the new leader by the members of the Nation of Islam. Shortly after accepting leadership, Imam Mohammed directed the members to focus and increase their study of the Qur’an, seek the proper understanding and worship of Allah, and His Prophet Muhammad ibn Abdullah (prayers and peace be upon him). Some of Imam W. Deen Mohammed’s critics assert that his dismantling of the Nation of Islam began with its belief system. Others believe that Imam W. Deen Mohammed’s designation of the development phases of the national leadership of both his father and himself, as the "first and second Resurrection," implies continuity in their common mission of human upliftment and correct knowledge. Question: Was the doctrine espoused by the Hon. Elijah Muhammad necessary for human upliftment? Did Imam W. Deen Mohammed’s leadership and mission dismantle his father’s teachings? How critical is correct religious interpretation to human development?