Does a religious community need a building to flourish? 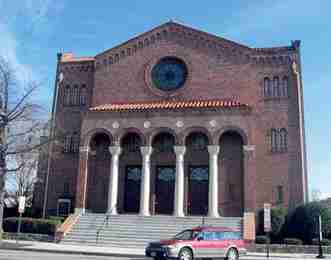 WASHINGTON (AP) – For decades, changes in American religious behavior and the District of Columbia’s demographics spurred a slow emptying of city houses of worship. And in recent years, many have shuttered, largely because of skyrocketing real estate prices, an exodus of African Americans from the city and millennials’ desire for unusual abodes.

But how great is the loss, and how much does it really matter?

The year-old nonprofit Sacred Spaces Conservancy has started quantifying the disappearance of houses of worship in the District’s most intensely developed neighborhoods, where the buildings are rapidly being torn down or converted into housing, especially around H Street NE.

Using city data, the group has found that between 2008 and 2018, Capitol Hill has lost about 40 percent of buildings owned by congregations of various faith backgrounds and used regularly for worship.

The group’s incomplete research estimates Shaw-Bloomingdale has lost about 30 percent of such buildings, and the entire city may have lost around 25 percent.

To Sacred Spaces, and some researchers of civic life, these buildings have abundant spiritual and communal value, making their decline a cause for alarm. They have pointed to research suggesting places of worship generate the equivalent of thousands or hundreds of thousands of dollars apiece in savings annually through the services they offer the community, including help for the poor and below-market rental rates for community groups.

Yet the full story of the trend’s impact is more complex, and even clergy in affected neighborhoods say it isn’t just one of loss. It’s also a tale of what is happening in the wake of the city’s great demographic shifts, as well as how Americans’ religious and spiritual practices are changing.

Many of the shuttered houses of worship on Capitol Hill weren’t huge engines of economic benefit for the community because they were nearly empty, their members mostly having relocated to Maryland’s suburbs as part of an exodus of black Washingtonians from the city. And the city’s gentrifying neighborhoods, according to Sacred Spaces’ executive director, Liz Laird, are the ones with the highest number of new congregations – communities of younger and often evangelical residents who are less focused on owning a building and more on service.

Cities like Washington have in recent years become prime “mission fields” for evangelical communities that look to such places as movie theaters, homes, coffee shops and rented spaces for experiential faith rather than a big sanctuary with expensive monthly mortgage payments.

The Sacred Spaces data doesn’t capture such congregations if they don’t own a building. It also doesn’t include, or even engage with, questions of how Americans now define “sacred space,” including people who may see volunteering or meditation or activism as important and sacred practices, even if it doesn’t happen at a church or synagogue or mosque.

American faith is changing. Even worship groups that wind up purchasing property aren’t sure any longer whether they want it to be used for a traditional church building.

Evangelical Christians “see that part of who we believe Jesus is was incarnate, so he came and moved into the neighborhood. You don’t need a (church) building to do that,” said Noreen Bryant, spokeswoman for the National Community Church.

The organization worships in buildings it owns in the city that are used for other purposes as well, including a coffee shop and a movie theater. In some cases, they also rent space for worship.

While it’s hard to deny some kind of loss in the city with the traditional buildings changing purpose in the past decade, Bryant said, “I’m not sure there are fewer religious communities or religious people” on the Hill.

It’s also not clear that the dwindling number of houses of worship means traditionally religious people are any less devoted in their religious practice, or that the loss has meant an overall reduction in social services such as food for the poor or child care or legal aid in those communities.

“It’s not bad or good. The house you grew up in isn’t the one that makes sense to you now,” said Terry Lynch, a longtime advocate with the Downtown Cluster of Congregations.

Church buildings from 20 or 100 years ago, Lynch said, don’t fit the worship styles of today. And a lot of the ones that were sold off, he said, “aren’t the stronger, thriving ones.”

What the buildings’ disappearances indisputably means, Lynch said, is the loss of many of the people who were once congregants in them – mostly longtime African American residents, including those who have been priced out of the city. The diversity, historical continuity and community can’t be easily replicated, he said.

The history is reflected particularly through certain shuttered church buildings, such as Lincoln Congregational United Church of Christ, a 149-year-old Shaw church that was founded by freed slaves and closed in September.

The Rev. Patrick Walker, senior pastor at the New Macedonia Baptist Church in the Fort Davis neighborhood of Southeast Washington, said his congregation recently debated how to expand to include other parts of the city and decided to buy a small property in Northeast.

But he says he doesn’t feel judgment toward religious groups that opt not to buy anything, or opt to sell.

“Our church could lift people up to the same extent if we didn’t own a building,” Walker said.

The District native says the city has become so transient that, for younger people, committing to a piece of property doesn’t measure success. “Church” means something different, he says.

“I think this is a generation that’s comfortable with renting, with smaller spaces, more casual, and they do extraordinary things,” he said. “The intimacy in those spaces is enviable to me.”

Because of more public skepticism about institutions and a falling away from religion, churches and other houses of worship need to again demonstrate their value to society, clergy said.

The Rev. Dan Claire said his evangelical house of worship, Church of the Resurrection, just voted to buy a property on Capitol Hill after 15 years of renting. He said there is a fresh conversation about the role of churches in American life, with hefty property purchases part of that calculus. But he still believes in the power of institutions, including their physical spaces.

“The long-term conviction of most evangelical Christians has been that if you change one heart, you change the world,”

Claire said. “But there is lack of appreciation at the same time for the difference that institutions make. I think this is the Achilles’ heel of evangelicalism. If it’s only at the heart level, then institutions are undervalued.”

In performing its census, Sacred Spaces is guided by new research, including some done by faith-based institutions, that aims to measure the societal impact of places of worship.

Often cited is research done in the 1990s by the University of Pennsylvania’s School of Social Policy and Practice and a nonprofit group called Partners for Sacred Places. It found that an average urban congregation creates more than $140,000 per year in value through the contribution of volunteer time; rental space at below market rates; and cash and in-kind donations.

In 2016, the two groups teamed up again to create a metric that also includes the housing of schools and day-care centers as well as increased foot traffic and argues that each congregation generates $1.7 million annually, on average, for the wider community.

A faith-based group in Toronto used the previous research to create a calculator it says shows every dollar a congregation spends could create $4.77 a city doesn’t have to invest.

Tim Barley, a District real estate agent and the founder of Sacred Spaces, says part of the problem is a lot of owners of worship buildings don’t know their options – including the existence of growing new religious groups that might want to buy. “If the decline in church buildings as third spaces continues unchecked, among other things, the residents of the city from all socioeconomic levels will be the eventual losers,” he wrote in an email. “Furthermore, this decline is occurring within the wider cultural backdrop of … urban loneliness that is endemic in our city.”

“In the African American worship experience, it’s important for our congregations to have a space that’s dedicated for worship, to call their own, to call home, a sanctuary – a space,” he said. “As a people who have been disenfranchised, the church has been historically what African Americans have owned and operated exclusively without other aid. It’s oftentimes symbolism in our community.”

Claire said a building became more important when his congregation dedicated more resources to working with Syrian refugees and wanted to offer services on weekdays.

An established worship space also means something particular in Washington, he said.

“In a city where people are identified by their iconic buildings – the executive branch is identified by the White House, and ‘the arts’ by the Kennedy Center. In our city, for a church like ours to be in business for 15 years but not own a building means most people have no idea we exist.”

Super Bowl Gospel Celebration back on BET, back in Miami