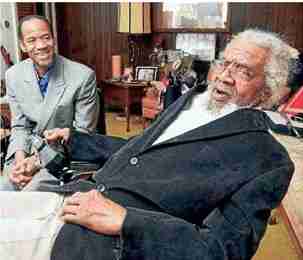 CHESHIRE, Conn. (AP) – When Jefferson Evans first came to New Haven in the 1940s to take an entrance exam to Yale University, “the first thing I did was look for black people,” as there were only about 400 of them in the city and the downtown was like being down south where he grew up because many businesses were segregated, Evans wrote in a new book.

Evans, 93, and a Cheshire resident, didn’t get into Yale, as he had a basic education only, and was steered there by a poster about sign-ups after getting out of the U.S. Army. He did later work at Yale University in floor maintenance.

But he did go on to become a trailblazer, finding great success as an area chef after becoming the first black graduate of Culinary Institute of America in 1947 as part of its first class. CIA, which started as the

New Haven Restaurant Institute, was located on State Street originally. Evans also went on to become an instructor in the culinary arts at Johnson & Wales, where he has been honored.

In the book’s foreword, Alex Askew, president of BCA Global and a 1989 CIA graduate, writes that he considers Evans the “Jackie Robinson of Culinary Arts.” Evans said he always knew that no matter the obstacles, with perseverance and hard work he could get ahead.

The book, entitled, Why Do People Treat Me The Way They Do? is a fast, entertaining read. Evans covers his childhood in Georgia – where black children went to school three fewer months a year than whites so they could work the crops; his move to Cheshire, where a cross was burned on their front lawn in the 1970s; the tragic loss of a well-educated young son to drugs. A video of his life’s highlights can be found on YouTube.

Evans, in his title suggesting he’s been treated wrong by people, isn’t mostly referring to racism, but other bumps along the way from having his cradle set on fire by a sibling to being scammed and misled as an adult by family and acquaintances.

Evans at one time owned a successful restaurant at 609 Dixwell Ave.- “One `N’ Only,” where he originally intended to sell gourmet food, but wound up specializing in soul food because that was a demand.

Evans is well-known in the area as a longtime chef at Reilly’s Restaurant in Hamden.

Evans shares highlights of his interesting life – a life of hard work, perseverance, some family tragedy -in the self-published autobiography written with the help of his friend, Glenn Ellis.

Evans, who married a nurse and had three children, describes encounters with racism in the job market decades go. At one place he was told by a manager that they had hired black people in the past and they stole.

During a job interview in Meriden, he spent an hour being interviewed and in the end heard, “I’ll call you.” But at that point Evans said he knew that meant he’d never hear a word- so he stood up and told the man that no matter where he looked, he’d never find a better chef.

Evans was hired right then.

At another place in Branford, he was told by a manager that he’d give him the job, but he’d have to work three times harder than the white employees.