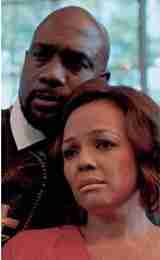 “The only thing me and Teresa have been doing is trusting in God and look where it has gotten us.”

This is what one of the characters says in the new faith-based film, “A Question of Faith,” while dealing with a tragic situation – and he happens to be a pastor.

It is a question many have grappled with for centuries: “How can a loving God allow tragic things to happen to good people?”

Pureflix’s latest release attempts to answer that question. Debuting in more than 600 theaters on Sept. 29, the movie is the first of its kind by a black female producer – and the first faith-based feature for veteran producer Angela White of Silver Lining Entertainment.

In the film, three families from various cultural backgrounds (Black, White and Latino) find their lives interwoven as each deals with back-to-back respective tragedies.

All of the families live in the same community, but are initially strangers until a texting and driving accident thrusts them onto converging paths and leaves them at a crossroads, questioning their faith and the higher power that guides our destinies.

Through it all, they must discover God’s love, forgiveness, grace and mercy.

The film features a compelling storyline that touches on timely topics such as racial prejudice and the debate surrounding organ donation, while intertwining a strong message of faith.

The film was a resounding success in early screenings. The Atlanta premiere, held Sept. 25, drew nearly 3,000 people and over 30 local and national media outlets – causing it to break attendance records at the Regal Cinema theater where it was held.

“God never ceases to amaze me on how He will go beyond our wildest imagination. The Atlanta premiere was the power of God on full display,” said White. “To have 3,000 people all in one movie theater watching God’s work on 16 screens is the most powerful ministry that I have personally been a part of. ‘A Question of Faith’ is a trans formative movie that touches and impacts everyone to the root of their soul. I feel honored to be part of such a magical film that will touch so many lives.”

The trend continued for the movie at the box office as it grossed over 1.1 million dollars during opening weekend according to Deadline. That’s a notable feat considering the movie only opened in 661 theaters nationwide.

According to White, a large part of the success is due to the major support from the faith-based community.

“Churches have been resonating with the film’s message and many are buying out multiple screens for the opening,” White said at the Atlanta premiere.

Next post Dealing with grief from an unexpected, accidental death