MACON, Ga. (AP) – A group of women met for the ﬁrst time a decade ago at an open house event at the Islamic Center of Middle Georgia.

Christian women attended the event in hopes of meeting some Muslim women to learn about their faith. They met. They talked, and they decided they needed to meet regularly to discuss their faith and how its impact on the Middle Georgia community.

Starting with 10-15 women around a table, the group shared meals together as they had intentional conversations about their faiths. As the group grew, they became known as the Women’s Interfaith Alliance of Central Georgia, which has around 500 members on its Facebook group.

“We live in a global community that is increasingly becoming more connected. So, learning about each other, learning to form relationships with each other, learning to coexist in appreciative, intimate ways is very important for the peace and harmony of human societies in general, especially so here in the South,” said Eman Abdulla, one of the founding members of the group.

As WIA grew, they opened their doors to women of all faiths, including women from the Jewish, Hindu and the Baha’i faith, and after the coronavirus pandemic started, they have had women in different states and even countries join their Zoom meetings.

“It’s like modeling kind of a practice and a way of living cohesively and harmoniously that is doable. It’s transferable also to other places where diverse people come together,” Abdulla said.

Although WIA started as Christian and Muslim women meeting to eat, it grew to include multiple faith traditions quickly.

“One of the primary, foundational things of our group is that we’re interested in acquiring an appreciative knowledge of other faith traditions, and we want to do this through friendship and education and service, and so all of the things that we do, whether it’s in the social context where we come together and talk about a speciﬁc topic and learn like that or whether we’re serving in the community, we try to organize all of our activities around those three things,” said Debbie Krafft, a founding member of the group.

The group has a book club and a study group and they have hosted several events, including a poetry night and a health fair, Krafft said.

Because they have gathered together to share food from their different religions, WIA created a cookbook with recipes from all of the different faith traditions.

The biggest challenge the group has faced has been ﬁguring out how to have these intimate conversations with a growing number of people, Krafft said.

“You’ve got to feel comfortable and safe. When we stopped being around one table and suddenly we’re in a room that had 10 or 15 tables, we decided to put about six people at each table, but we want to have diversity so we have to mark seats,” Krafft said.

Aqsa Rehan, a part of the group’s leadership committee, said she joined the group just after its inception.

Before she joined WIA, Rehan said she was feeling a little lost and was having a hard time ﬁguring out her purpose. While she was in Pakistan, her husband called her to let her know the Islamic Center of Macon had been vandalized.

“When I came back in December, I was, I was thrilled to have these ladies, plus many more different churches came to the mosque and supported us like never ever before I have seen in my life. That was so touching,” Rehan said.

Flo Martin, who is also on the leadership committee, asked Rehan if she wanted to host one of their meetings at the Islamic Center of Macon, and Rehan jumped at the opportunity, she said.

She was told to prepare for 25-30 women, but around 75 people came to the event, Rehan said with a smile as she remembered how they had to keep adding tables and chairs to accommodate everyone.

Before the group, Rehan said she never knew anything about other religions, she said.

“The biggest part we want to teach is that we are more similar than we are different,” Rehand said.

Members of the group have dealt with resistance from their families about the idea of interfaith fellowship, Abdulla said.

“They’re facing resistance from their families and community to the idea of interfaith contact, which it’s like kind of fossilized stereotypes and misconceptions that kind of make it like flirting with the enemy or something,” Abdulla said. “Contact and experience and intimacy would actually do wonders if you just make it happen.”

Being a member of the WIA has opened up Abdulla’s faith and made it more inclusive, she said.

“It opens up venues and horizons for a better future for all of us. If we really intend to, if we willingly and purposefully pursue this choice of living together harmoniously, we can do it. It’s not impossible,” she said. “The Tower of Babel is not our destiny. We can all communicate even if we have different languages. We can still communicate. We can coexist. We can cooperate. We can make the world a better place.”

Hina Banit, a member of the leadership committee, said meeting and learning from women of different faiths makes her a better Hindu.

“I think a lot of people fear what they don’t understand, and once you’re open to the idea and you’re saying, `Okay, they’re not so different,’… I think that opens up our boundaries,” she said.

Racha Aimach, a founding member, said hatred is born of ignorance, and it is important that people learn and grow together.

“We are looking for peace and cooperation. So, this is a small environment, my Atlantis. I can call it the perfect city where everybody has his own set of beliefs, but he has respect and knowledge and understanding for the other party,” she said. “Our interfaith group is really a great representative of why God created us all different. At the same time he expected us to respect each other, live in peace and love each other.”

Learning about Christianity and Judaism, Aimach said she learned more about Islam because stories in the Qur’an are also in the Christian and Jewish religious texts.

“It’s very informative, elaborating, and also gives you a better quality of your own faith. Even though you are learning more, more about other traditions, it just gives you a greater value of life I think,” she said.

Betty Taylor, a member of the leadership committee, said after a career working with Middle Eastern countries, the rhetoric about Muslims in America following the 9/11 attacks really bothered her.

“It’s breaking down some of those beliefs that people have that are wrong, and it’s an opportunity to form real friendships,” she said. “It’s breaking down barriers to more show us all as the same. We just happen to be women who have a different faith than others, but that doesn’t

interfere with the friendships that can develop, and also to recognize that by learning about other faiths, we become stronger in our own.” HOW TO JOIN?

Aimach said a common thought about interfaith groups is that everyone is trying to convince each other to join their faith tradition.

“Interfaith communities should not be about that. It should be about communicating, expanding your wide horizon of knowledge because knowledge is the ﬁrst thing that you use for peace,” she said.

Krafft said they have an atheist woman in the group who asked if she could attend the meetings to learn about the different religions.

“She said, `I love to come to your meetings because you have interesting conversations and no one tries to convert me.’ She really appreciates that,” Krafft said with a laugh.

The only prerequisite for joining the group is to have an interest in learning and respect for other people’s beliefs, she said.

Although the group is not a registered nonproﬁt, they have several service activities including volunteering at Daybreak in Macon.

Marlene Humphry, a member of the leadership committee, said she was asked to present to the group about her Jewish faith, and because she started practicing the religion later in life, she showed them the book she used when she ﬁrst started learning about the religion: Judaism for Dummies.

Humphry has learned more about her faith since joining the group because she had to learn how to express her faith to other people, which raised questions she hadn’t thought about before.

After the Sept. 11, 2001 attacks, Humphry admitted that she became immersed in how Muslims were being portrayed and she felt guilty after meeting with the Muslim women in the group “That’s why this group has been so meaningful to me because I learned that there are bad people in all religions. There are good people in all religions,” she said. “I apologized to my Sisters of other faiths in tears because I hated that I had had those thoughts, but yeah, I was willing to admit that I was wrong and I’m glad that I found this group because they are like a family.”

Flo Martin, a member of the leadership committee, said as a Christian in a predominantly Christian nation, she had a false belief that everyone knew about the religion.

“When questions started being asked about Christianity, and being able to put some of the misconceptions behind that no we all don’t think the same way, and that there’s a huge spectrum even within our different faiths of Christianity and even within the denominations,” she said.

Martin hopes the group can continue to serve the community, help inspire others to create more groups around the country and hopefully start a youth group in Middle Georgia.

“What we have discovered is it’s not so much that we are women of different faiths, but we are women of faith, of different traditions. It’s not like a civic interfaith kind of women’s group. It’s women who are able to say, `This is an important piece of who I am is being a person with faith and of faith and living my faith,”’ she said. 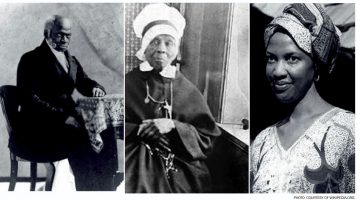