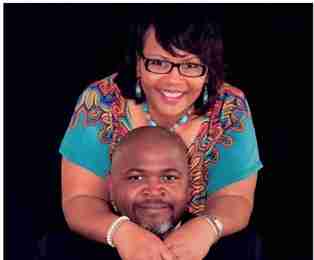 Rev. Robert Johnson, pictured with wife Tammy, is the pastor of a Louisiana church that will provide drive-through prayers on Good Friday.

NEW ORLEANS (AP) – A Louisiana church is gearing up for Good Friday, when its pastor and volunteers gather on the church’s long circle driveway for drivethru prayers.

The Rev. Robert Johnson got the idea four years ago, when he was standing outside Louisiana Avenue United Methodist Church in Lafayette and watching traffic pass by. He said God told him that people who don’t have an hour for a church service need prayer, too.

His church agreed. So, from 8 a.m. to noon Friday, some volunteers will hold signs advertising “free prayers” while others bring coffee and doughnuts or pray with drivers and passengers. They range from a 94-year-old woman to children there with their parents.

“We come on both sides of the car and pray with everybody in the car,” Johnson said in a telephone interview Thursday from Lafayette, about 120 miles (190 kilometers) west of New Orleans. “And give them coffee and doughnuts and send them on their way.”

Numerous churches around the country hold drive-thru services on Ash Wednesday for people who wish to mark the beginning of Lent by getting an ashen cross on their foreheads.

Drive-thru prayers are another trend, said Rabbi Irwin Kula, president of Clal, The National Jewish Center for Learning and Leadership in New York.

Now, he said, he’s heard about it in numerous places, including Minneapolis, Florida, Tennessee and Indianapolis.

“Just like every domain is being disrupted, making things more accessible, more efficient, cheaper to get done, now we are beginning to see disruptive innovations in religion,” Kula said. He said thousands of churches have gone under in the last decade, but people still need prayer.

The Living Streams Church in Phoenix, Arizona, provides such prayers from 3:30 p.m. to 5:30 p.m. on weekdays from October through May. They’re on the calendar from 4:30 p.m. to 6:30 p.m. Fridays at the Christian Life Center in Fort Lauderdale, Florida. In Fremont, California, Holy Spirit Catholic Church offers such prayers Monday through Friday from 5 p.m. to 7 p.m. “It doesn’t matter what religion you come from,” a priest says in a video on that website – Protestants, Muslims and Hindus are welcome, too.

Over the past three years, the number of cars at Johnson’s service has risen from about 100 to more than 160. He’s hoping to break 200 this year.

About 25 of the church’s 200 or so members generally sign up for one of the three jobs, Johnson said.

They also give out mustard seeds in small plastic cases to illustrate Jesus’ saying that faith as small as a mustard seed can move mountains.

Cars bring locals and people who just drove off a nearby interstate exit. “We had a couple people traveling in from Texas. They saw us and turned around in the street,” Johnson said.

One man wept for a son in another state, who had lost his job, Johnson recalled. “He was praying for his son to get back on his feet.”

Johnson said the event brings the community together, across cultures, races and denominations. “It’s not about who’s a Catholic, Methodist or Baptist. Anyone who’s a believer who needs prayer may drive up and receive prayer.”

Johnson said some people send letters or emails saying the prayer helped. One, he said, was from a woman who blamed herself because her daughter was on drugs. “By us praying, she was able to focus on how could she get help and not blame herself, and trust God that he would see her through,” Johnson said.

He said members of his own church attend an in-church Good Friday service at another church, whose members come to Louisiana Avenue UMC for a service the day before.

Preparation includes making sure all the signs are ready, people have signed up, and advertisements have gone out on social media, Johnson said.

Johnson said he is thinking about adding a Friday “drive-home prayer” sometime in the summer. “A lot of people come through this way, getting back to the interstate,” he said. “Maybe they had a week that was so bad they need prayer for the week.”