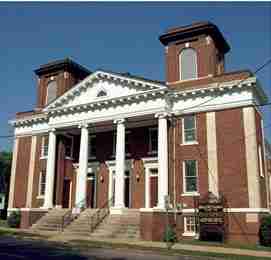 PAINFUL HEALING: The Old Ship A.M.E. Zion Church is across the street from the Equal Justice Initiative’s lynching memorial.

MONTGOMERY, Ala. (AP) – The congregants swayed to and fro with the keyboardist as golden afternoon sunlight streamed through Old Ship A.M.E. Zion Church’s stained-glass windows on a recent Sunday afternoon.

We have come over a way that with tears has been watered. We have come, treading our path through the blood of the slaughtered,Out from the gloomy past, Till now we stand at last.

At Montgomery’s oldest African-American church site, a rolling plot of land donated to slaves in 1853, church members and community guests’ voices melded together as they sang stanzas from the hymn “Lift Every Voice and Sing.”

Across the street from Old Ship sits Equal Justice Initiative’s newly opened lynching memorial which, along with an accompanying downtown museum, exposes the terror of American racial violence and memorializes its victims.

The Sunday service capped days of commemoration and celebration for EJI, a week deeply rooted in an evangelical Christian faith that has served as the axis of Montgomery communities of color throughout struggles for equal rights.

Church leaders say it’s no accident the memorial, a haunting grove of victims who were brutally murdered in acts intended to subjugate black Americans, sits near a place of sanctuary.

“God fixed it that when you leave over there angry, you can come over here and experience the love of God,” said J.E. Fields, a presiding elder of the A.M.E. Zion East Montgomery district.

Though it’s natural for visitors at the memorial to experience anger, frustration and pain at the violence and cruelty on display, Bishop Seth Lartey told the church he believes the faith community can provide a respite of forgiveness and ultimate victory “over evil.”

“Our hope is people will make their way to our church eventually, that it will allow them a place of refuge, a place of sanctuary,” the Rev. Kathy McFadden said last week. “We’re hoping the entire community will begin to heal. Not to put it behind us, but to come together.”

A multi-denominational group of faith leaders led that Sunday’s crowd in prayer for “remembrance, restoration and renewal” in Montgomery’s community, as well as for the lynching victims.

“We pray that you will give us the grace to remember and the minds and hearts to make them as present in this moment, when we recall them, as they are to you in your divine love,” Father Manuel Williams, pastor of Resurrection Catholic Church, said of the lynching victims named across the street.

Stevenson, who publicly thanked Old Ship’s congregation at April opening ceremony, said Old Ship and the memorial’s surrounding neighbors will continue to be a vital part of its success in Montgomery.

“I think we’re on the edge of something that can transform this city,” Stevenson said. “Together we’re going to make this a place of healing and recovery.”