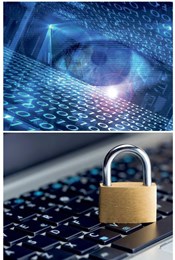 SCRANTON, Pa. (AP) – Federal prosecutors say a Pennsylvania man created a digital image of himself pointing an AR15 rifle at a group of praying Jewish men and posted it online.

The image is one of several alleged threats against Jewish, Muslim and black people that authorities say were posted by 30-year-old Corbin Kauffman.

They say the Lehighton man also sprayed anti-Semitic graffiti at a park; plastered an Ocean City, Maryland, Jewish center’s display case with white supremacist and anti-Semitic stickers; and posted photos of the vandalism.

Last fall, a gunman with an AR-15 rifle and other weapons opened fire at Pittsburgh’s Tree of Life Synagogue, killing 11. Authorities in that case say Robert Bowers expressed hatred of Jews.