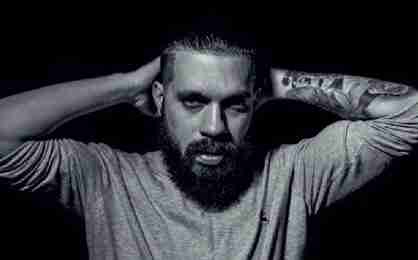 Courtesy of Jam The Hype

“[I’m] just a young guy getting older. Born and raised in Miami, Florida. Trying to make a difference. Trying to revolutionize the schools.”

At age fifteen, Oscar Urbina started hanging out with friends in school who were big fans of Hip-Hop. “Some of them would write and I wanted to write too … It’s crazy how night and day it is. If you hear my first writing, it’s not as advanced as it is now, not even close.”

When Oscar Urbina was sixteen years old, “The Passion of the Christ” came out in theaters. He went to see the movie with friends, and (said) “the movie struck a nerve with me. What was this movie about?

Was this guy just being beat up? I didn’t know the reason for it and the movie didn’t say.”

Shortly afterwards, while playing Madden with friends at his house, Urbina saw a book on the coffee table, the Gospel of John.

“I saw that it said the name Jesus in there and I remember [in] the movie, ‘The Passion of the Christ,’ they would constantly say ‘Jesus.’ So this book is about the guy from the movie.”

A few days after finding it in his house, he brought it to school with him to read it.

“It captivated me. I read the whole book of John from first period to seventh period. That kind of sparked off the interest in Christianity.”

Oscar Urbina is not releasing his third project. “MP2 Darkness” is the name of Oscar Urbina’s new mixtape. “MP2” is an abbreviation for “Molly Pitcher 2.”

In 2016, he released a mixtape called “Molly Pitcher.”

Molly Pitcher was a woman of legend whom he learned about in a history book. During the American Revolutionary War in the late 1700s, soldiers often suffered from heat exhaustion, and she was believed to have carried water to the soldiers from a nearby spring.

“She was considered a hero for doing such a small act. What I’m saying with the project is [something] I’ve realized … you can do the little things in life to be a hero. I’m being a hero on this project by being transparent. By being transparent, other people are liberated by the realness of the project.”

For listeners to have a good understanding of “MP2 Darkness,” they should know that it is like a Psalm.

“In the Book of Psalms, you’re not going to get any sugar coating. You’re basically reading someone else’s diary. That’s someone’s real life experiences and how they dealt with God through those experiences.”

“Once I realized my 20s didn’t go the way I had planned it … I had to re-evaluate life in general. How I looked at things because I looked at it with the perspective that everything has to go according to plan.”

The first song on the project is called “Rocking With Ya,” and is about maintaining faith through doubts and difficulties.

Urbina says that one person he knew explained that to him in this manner: It is false to say that God doesn’t care about our suffering because Jesus came to Earth and suffered in his death.

“I might not know what the answer is, but I know what it’s not. The answer cannot be that He didn’t care or He’s indifferent.”

In “Callous,” Urbina speaks about how he can become callous at times. He says that it is not a healthy way to act and think, but it has gotten him through some frustrating days.

He hopes that listeners will relate and connect to it, and reflect upon how they can be callous at times.

Urbina has worked as a teacher for the past five years, teaching in high school in New York City, and currently for middle schoolers in the Miami area.

“Tupac Shakur had this view where ‘We’re teaching kids how to read, write, [learn] history, and all that stuff, but when kids graduate at eighteen, they still feel lost.’”

He wanted to share his thoughts on education with the song “Teacher’s Chronicles.” Urbina’s main objection to how youth are currently educated is that they are not taught enough skills to prepare them for life and adulthood.

“School is where you’re getting trained, so you can tackle the jungle called life. A lot of kids, once they’re eighteen, are not ready.”

He believes that students should be taught about how to manage money and finance, how to budget.

Urbina also says that health classes should be taken more seriously. Being healthy is such an important aspect to each person’s life, whether they think it is or not.

He believes that each gender should be taught how to understand the other, and thinks that it would lead to lower divorce rates and better relationships between couples.

Another important topic that Urbina thinks is important for students to learn is how to manage stress, a standard aspect that comes with school.

He also believes that students need to come out of school with a knowledge of different religions and worldview, a subject that people are often unsure how to address, or if they should address at all, in schools.

“I Have to Know” is a song on “MP2 Darkness” that should be understood in the context of a person driving, Urbina said.

He said that sometimes when he is on the highway, especially at night, he has deep and serious thoughts about life, looking back on his past, analyzing his present, and imagining his future.

“Old Ways” is about missing the way things used to be.

“[When] I used to grow up in my neighborhood, all my friends were very close. We were best friends and would play great games of basketball. [I enjoyed] all those experiences but then you get older and see how things drift. You barely even see people and are kind of a nomad.”

One of the memories Urbina talked about in “Old Ways” is about hurricane season. Living in Miami, Florida, hurricanes were common, and not as feared as they are in other parts of the Southeast.

“When the hurricanes took out our lights, we would play board games with flashlights.”

For fun, he enjoys making music. “Music, for me, is not just something I feel like I have to do, it’s fun for me. It’s something great. I love writing music, that’s something I do constantly.”

PLEASE NOTE: This article has been reprinted courtesy of Jam The Hype, one of the biggest and broadest media platforms for the Christian hip-hop market that reaches thousands of listeners across the globe. You may visit it online at www.jamthehype.com. The platform provides accurate and up to date information, including exclusive content from the hottest major and indie artists, as well as fresh video and radio programming to its growing audience. The article has been slightly edited for brevity and clarity.