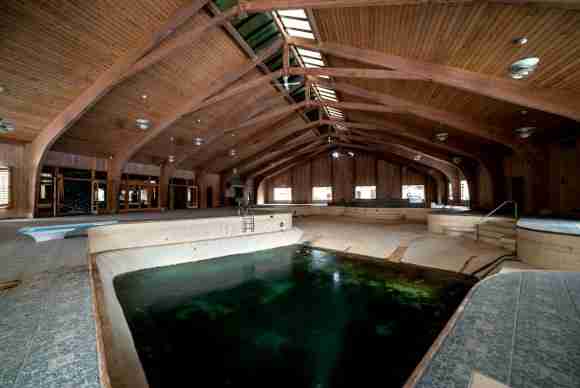 Boxing champ Mike Tyson’s former Ohio mansion will be converted into a church.

WARREN, Ohio (AP) – A garishly appointed Ohio mansion that heavyweight boxing champion Mike Tyson once called home and subsequently fell into disrepair is being converted into a house of worship.

The Living Word Sanctuary Church has been cleaning up the property in Trumbull County’s Southington Township, roughly 45 miles southeast of Cleveland, since the 25,000-square-foot mansion was donated to the church several years ago.

“The property had been untouched for 10 years,” Living Word Pastor Nicholas DeJacimo told the Warren Tribune-Chronicle. “You had so much grass you could have sold it for hay.

The mansion is a considerable step up; the church has been holding services at a YMCA. The sanctuary the church hopes to have ready by year’s end is an area where Tyson and his guests splashed in an indoor pool. A four-bay garage is being turned into youth classrooms and a nursery. Tall steel cages where Tyson kept four tigers have been dismantled for a pavilion.

“We heard there were some crazy parties here,” DeJacimo said. “We will turn this into a room where women can get ready for a wedding.”

Church offices and meeting rooms are being built on the second floor.

It’s unclear which of the mansion’s design features can be attributed to Tyson or the previous owner. It was built in 1979.

Tyson bought it at sheriff’s sale in 1989 for $300,000 and sold it 10 years later for $1.3 million to Paul Monea, an infomercial entrepreneur best known for marketing TaeBo exercise videos.

Monea was sentenced to 13 years in federal prison in 2007 for money laundering charges. The mansion was bought at sheriff’s sale in 2010 for $600,000 and then donated to the church for a tax write-off. The church’s up-front investment was $50,000 to clear back taxes.

Tyson returned to the mansion in 1995 after serving time in Indiana for rape and lived there while training at promoter Don King’s camp in nearby Orwell, according to the newspaper. Tyson befriended neighbors during training runs and played basketball with kids on his court. People stop hoping for a look inside Tyson’s former home, DeJacimo said. He said the mansion “got dropped in our lap.”

Next post Roger Bannister, who broke the 4-minute mile, dies at 88